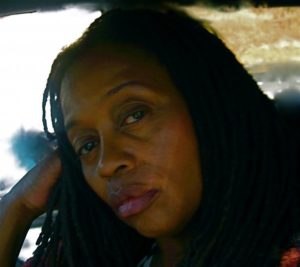 Ayodele "WordSlanga" Nzinga has spearheaded growth in West Oakland community theater. “Art is a necessity, a conscious form of communication."

Born in either the Midwest or the south – depending on which of her two birth certificates you want to believe – Nzinga insists that “Oakland is where I came of age.”

Oakland sets an ideal backdrop for Nzinga’s life in the arts.  She’s a poet and playwright.  Her talent extends beyond pen and paper to spoken word, theater direction and acting roles.

“My artistic practice is centered in West Oakland,” said Nzinga. She calls her area “emblematic” of many other urban communities across the country, because of the stories about struggle and triumph she hears from her neighbors. “It’s every hood to me.”

Nzinga gravitated to words at an early age.  At age 6, she participated in a church Christmas pageant. She quickly grasped the overall story and the way each character worked with the rest of the cast.

She remembers her friends struggling to learn their lines, while Nzinga memorized every part in the play. During the pageant she blurted out lines when others forgot them.  “The play became a monologue,” she recalled.

This childhood experience made a life-long impact on Nzinga. “It made me feel powerful.”

She wants others to have that power, too. Nzinga believes that everyone has the ability to shape, mold and tell their own story.

In 1999, Nzinga founded the community based theater troupe, the Lower Bottom Playaz.  Just a year later, the Prescott-Joseph Center for Community Enhancement invited Nzinga to be an artist in residence.

Nzinga’s commitment to bringing community theater to West Oakland impressed the center.  Based on her ideas, Prescott-Joseph built The Sister Thea Bowman Memorial Theater as a space for public performance.

The theater is “a phenomenal investment in my dream,” Nzinga said.

During the summer, she organizes the Sister Thea Summer Day Camp, where children and adults take theater and acting lessons.  The day camp wraps up with a community performance.

In addition to educational outreach, Nzinga is busy with her own work.  Her play Mama at Twilight: Death by Love is about how AIDS threatens to tear one black family apart.  The play concludes with an audience discussion.

Nzinga wrote the play to expose what she calls “open secrets” surrounding AIDS and homosexuality in communities of color. She hopes her work can move people to think and act differently. “There is a greater potential for change when the heart and head are connected.”

Mama at Twilight: Death by Love has run several times this year and is slated to return in 2011.

Nzinga proves daily that art is life, it is something everyone in every community needs.  Her work brings people together into one space to enjoy and discuss plays, and share lessons that span generations.  “Art is a necessity,” Nzinga insisted, “a conscious form of communication,” which is why she works so hard to share her skills with her community.

Catch Nzinga and the Lower Bottom Playaz in Bathroom Graffiti Queen and Flowers for the Trashman this fall at the Black Dot Cafe. There are shows on Saturday, November 20th at 2pm and 8pm.

For more news and updates from Nzinga and the Lower Bottom Playaz, visit their website www.lowerbottomplayaz.com.