Each of our correspondents took a 3 square-block walk around their neighborhood, taking stock of the area’s services, stores, homes, schools, and especially how people in the community were living their lives. The goal is to give real, detailed texture to our understanding of the quality of life in East Oakland’s neighborhoods from the perspectives of people who live there. These pieces were done in conjunction with Oakland Tribune Violence Reporting Fellow Scott Johnson’s Oakland Effect project.

In my neighborhood, it is mostly quiet. The silence is gently punctuated for the most part by birdsong and the occasional passing car. Only once on my excursion do I see and hear a car speeding past with loud music blaring from its speakers. The inhabitants hidden by the tinted windows, but I am guessing, by the choice of tunes, teenagers.

The foot traffic is also light. In two hours of walking, I encounter only about a dozen people on a Saturday morning, although a good cross-sectional representation of the demographics of O-town. I see an elderly Asian couple, a young African American couple pushing a baby carriage; two mid-twenties guys – one white, one black – walking their dogs; a middle-aged white woman working in a community garden; two Latino men loading a pick-up truck with a ladder and other construction equipment; and a group of about six or seven teen-age Asian girls giggling and chattering away.

My walk took me from my home at 8th Avenue west to East 24th Street, south to 11th Avenue (home of the famous tall palm trees of Oakland), east to East 28th Street and north to Park Boulevard.

My particular block is quite lovely, shaded by huge trees on both sides of the street, single-family homes, duplexes, triplexes and four-plexes mostly, well-maintained, pleasing colors, colorful gardens and even marigolds sprucing up a fire-hydrant. Mostly late-model cars are parked, unharmed, on the shady streets. Only the occasional piece of trash drifts by. 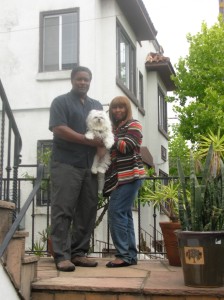 Sam and Shirley Williams are long-time homeowners. They first rented out their duplex in 1977, and moving in about 10 years later. They describe the neighborhood as peaceful and quiet. “People stay a long time,” Sam said. “It’s close to both freeways, 580 and 880, and the Lakeshore shopping district is just a short drive away.”

Shirley said she would choose this neighborhood if she had it to do all over again. “There are lots of professionals here, lots of teachers.” She describes this area as safe, with only a garden hose being stolen last year. She also likes that there are many homeowners, and lots of people can be seen walking their dogs. She said that people care about the neighborhood and she hopes the Neighborhood Watch that used to be active will start up again. “Our home is really beautiful,” she said. “I love living in Oakland; it’s a secret gem; people just don’t know that this is the real Oakland.”

Heading south or west, the neighborhood does grow a bit shabbier. Taking a left on East 24th, I encounter bars on the windows of many homes as I pass 9th Avenue, as well as giant metal fences, some utilitarian chain-link fences, some grand wrought-iron fences with curlicues and gilded gates. Still, the streets remained fairly quiet, with few people. One man leaves a box labeled “Free” at the bottom of the stairs to his home. It contains mostly plastic toy vegetables.

The architecture in Oakland is quite diverse. A single block will have classic Queen Anne Victorians, Craftsman homes, bungalows and 1970’s style apartment complexes. I see the occasional sign supporting Abe Guillen for Assembly. A few homes have murals. My favorite is on 11th Avenue: “Create Peace Oakland” in huge green letters on a blue background is its message.

This particular 3-block radius from my front door is home to very few operational stores, and quite a few empty ones to the north, but none at all to the east, west or south. All the commercial activity is along Park Boulevard, from Dave’s Grocery & Liquors at 7th Avenue and Park Boulevard, to “Lashing Out,” and “oh! my nappy

hair,” (sic) at 8th Avenue and Park, where there is also a corner store named simply “Groceries and Liquors/24 Hours.” In between, there are several abandoned storefronts, as well as a small barber shop, nail salon, dry cleaners, and, across from Dave’s Grocery & Liquors, is the Izom Café, which may or may not be abandoned.

About half of Dave’s Grocery & Liquors is devoted to liquor – mostly beer and wine – with the rest of the shelves stocked with canned goods, snack foods, and one small, three-tiered stand with bananas and oranges. The nameless grocery, a long block away, boasts a sign in the window that advertises its produce selection. It has a small selection of fresh fruits and vegetables in the front of the store, and the remaining shelves hold an inventory similar to Dave’s. Both stores are busy with customers coming in for snacks and liquors. One middle-aged man looks over the vegetables for a long time, but leaves with only a six-pack of beer.

Having driven down Park Boulevard every day for many years, I was surprised to come across the Sacred Birth Place, which I have never noticed until now. It’s in an unassuming storefront in the middle of a residential block on Park Boulevard. Their website connects midwives, doulas and childbirth educators with expectant mothers.

Beyond the corner stores, the Sacred Birth Place, and the hair and nail salons and shops, there are a string of empty storefronts, most of which have empty for long periods of time. No businesses seem to survive for long in these storefronts, perhaps because Park Boulevard is not truly a walking street, like nearby Lakeshore or Grand Avenue. Drivers zip by, in a hurry, not noticing what is there.

Bella Vista Elementary School has an attached park. Bella Vista Park is the first park I see on this walk. The school and the park fill an entire square block, from 10th to 11th Avenue and from East 27th

Street to East 28th Street. On this Saturday morning, the park is deserted except for a woman working in the community garden in one corner of the park. She tells me the park is usually filled with children. I comment on how little playground equipment there is, plus just a few basketball hoops, no grass, and lots of blacktop. “Maybe there’s not much equipment,” she said, “but the kids always find something to do. They’re pretty creative!”

The gardener tells me that the Bella Vista Park Community Garden has been going for several years, although she has been a member for only about 18 months, after being on the waiting list for years. The garden, though a bit straggly, has about a dozen vegetable and flower beds, including one in an old tire. She is growing mint, kale, tomatoes, lettuce, chard, dill and other herbs. “We have work parties once per month, and we also help each other. Like if someone is going to be out of town, we’ll try to water and take care of each other’s garden beds.” She tells me it is funded by Oakland Parks and Recreation, and has a new director, who is doing a better job of keeping track of who is not keeping up, so new members can be brought in.

A couple of days later, on Memorial Day, I come across three people breaking ground in a brand-new community garden on Park Boulevard. “We plan to plant sunflowers first,” one woman tells me when I ask what they will grow. “Sunflowers heal the soil, draw out the toxins.” I remark that I did not know anything was behind this graffiti-laden fence. A young man, perhaps in his late 20’s, with heavily tattooed arms, tells me, “I like graffiti.” A middle-aged woman, leaning on her shovel, agrees with him. “Better than billboards. You have to get the word out.”

Bella Vista Elementary School, the only operating school in the area I covered, is on the west side of the park, with a chain link fence separating the two. The school also has its own garden. BVES appears well maintained, with cream-colored paint on the outside, clean grounds and manicured gardens in front of the school. This school is also my polling place and has a warm and welcoming interior, with bright colors and student work displayed on the halls and a spacious lobby.

I encounter a few patches of graffiti on my walk. Some of it is the rather utilitarian, such as the almost indecipherable and often somewhat meaningless tot those not in the know scrawl as seen on the green fence here. My favorite, though, is “Flobots,” with its simple, single rose on a white brick wall. I do not know to what it refers or if its date of November 17, 2009 is significant. I assume it was an important day to the artist, and now its legend is on this wall, its meaning probably both unknown and rarely considered to the passersby who may notice it.

“My walk around the neighborhood gave me a new appreciation for my tiny corner of Oakland, a city often described in terms of violence, gangs, and failing schools. But what I see from my front door is a lot more hopeful. As Shirley said, it’s a great place to live.”