Health of the Hood: 18th & Park/Haddon and Ivy Hills

Each of our correspondents took a 3 square-block walk around their neighborhood, taking stock of the area’s services, stores, homes, schools, and especially how people in the community were living their lives. The goal is to give real, detailed texture to our understanding of the quality of life in East Oakland’s neighborhoods from the perspectives of people who live there. These pieces were done in conjunction with Oakland Tribune Violence Reporting Fellow Scott Johnson’s Oakland Effect project.

Starting on Merritt Avenue and walking down the Cleveland Cascade to Lakeshore Avenue, I head south along Lake Merritt, where people walk, jog, and bike along designated paths at almost any hour of the day. Lakeshore Avenue curves alongside the eastern edge of the lake, and on the other side is lined with architecturally diverse apartment buildings with striking views of the sun setting behind Downtown Oakland. 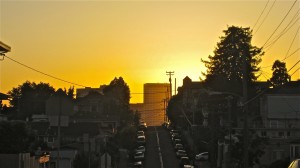 At 18th Street, I turn east, walking past busy tennis courts, the historic Merritt Bakery, and the large and always lively Lucky Supermarket. Half a block from Lakeshore, sunset views and the luxury of lakeside living give way to a more mixed-income area. The shell of the Parkway Theater is covered in graffiti – some pieces by local professional artists Ras Terms and Dead Eyes, others by amateur opportunists. The building towers empty over payday lenders, a laundromat, and the ubiquitous corner liquor store. 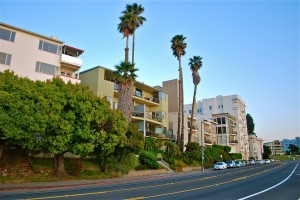 Proximity to the lake and the conveniences of the Lakeshore/Grand shopping district produce a competitive housing market and expensive rents. Gazing back at Lakeshore and all of the buildings in disrepair, there is a sense of fading elegance, of better times past. The once-glossy buildings do continue to offer a visual barrier from the more unpleasant realities beyond the Lakeshore façade.

For those of us who live on Haddon Hill, it is important to remember that the calm and conveniences we enjoy are not necessarily standard throughout all of East Oakland. I may describe the elegance on our hill as fading, but it is elegant nonetheless. The 12th Street project on the southern edge of the Lake and recent upgrades to the Cleveland Cascade will surely have positive effects on our neighborhood. Further comforts, however, should not come at the expense of safety or services for our neighbors to the south and east. Resources should not be funneled to maintain a façade, while the rest of the city suffers.

Notes on a neighborhood