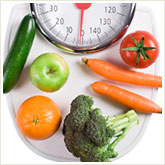 About 3 days ago, while waiting to clock in at Macy’s where I work inside of a mall, I went into a restroom. I walked by the weight scale I always see but shy away from because I feel that knowing my weight gives me a reality check about my poor eating habits.

Just as I was about to exit the restroom, I glanced at the scale once more. “Insert 25 cents,” it read. The scale also promised to give me my lucky lottery numbers for the day in exchange for a quarter.

Giving in to my curiosity, I took off my jacket, stepped onto the scale, and inserted a quarter into the machine. I stood as erect and still as I possibly could, as if waiting for a judge to hand down some damning verdict. I hadn’t stepped on a scale in several weeks. Not since I began this experiment that feels almost Biblical. I, Dawneka, must not, for a month, eat from the alluring tree which bears that most tempting but forbidden fruit – fast food.

I peeped down at the small screen. “Stand still,” it read. The scale’s LED display soon revealed my weight. To my surprise, I had lost six pounds! “Losing two pounds per week is healthy,” Delinda, my nutritionist, once told me. Her words echoed in my head.

I lost weight, I assumed, simply because I took the steps to eliminate fast food and adapt to a healthier diet. I honestly haven’t changed any of my daily routines, which don’t include regular exercise, and I still lost some weight.

For about two weeks now, I have been eating a piece of fruit – apples, pears, and bananas, mostly – with the majority of my meals or shortly afterward. These fruits don’t soothe my sweet tooth. No slice of apple has yet come close to a piece of Hershey’s With Almonds. But the fruit has been useful in satisfying my appetite.

I’ve also been eating unsweetened oatmeal or scrambled eggs for breakfast, and a peanut butter and jelly sandwich at lunch. For dinner I’ve been eating chicken, beef, and fish, along with broccoli or carrots. The portions fill me up just enough, so I don’t go hungry and I’m not stuffed.

For me, these are major steps away from a Carl’s Junior Big Burger and KFC Snackers.

Excited about what the scale was telling me, I left the bathroom and stepped out into the shopping mall with an entirely new attitude. Losing weight excited me more than the short-lived rush from the taste a Big Mac or any other fast food could bring.