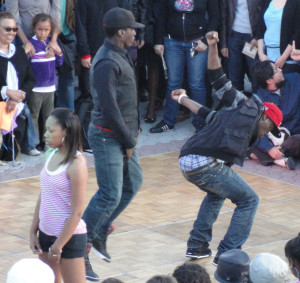 Breakers and turf crews faced off at the All Styles Dance Battle last Friday at Jack London Square. By Tyrese Johnson.

By Tyrese Johnson and Adimu Madyun

OAKLAND, CA – Break, glide, pop, lock, backspin, suicide. These moves and more were on display last Friday at the All Styles Dance Battle in Jack London Square. The contest was part of Home Grown, an annual event sponsored by the East Bay Express, and featured duos competing for the Best of the East Bay title.

The pristine hardwood dance floor was installed hours before the competition began. As DJs urged bystanders to congregate on the dance floor, 21-year-old Malia Jones was already enjoying a warm up.

Jones, who is studying cultural anthropology at University of California – Berkeley, has been dancing since she was four years old. She’s a trained ballerina who has also studied contemporary, jazz and hip-hop dance.

Battling is a new world for Jones, and this was her first competition. “Freestyle battles are so different than being in the studio,” Jones explained. She and her partner practiced for only one day. “He told me to just let my soul shine.”

The competition – which was hosted by YAK Films and thePeople promotion group – was reminiscent of New York City dance battles during the early 80’s. Young African Americans and Latinos ushered in a new style known as b-boying, or breaking. Street gangs – with dancers calling themselves b-boys and b-girls – often used breaking to settle disputes over turf or bragging rights.

Today, breaking is combined with new styles of expression like turf dancing and house.

“Battle dancing helps me let out my anger and frustration, and it helps me keep out of gangs,” said Fabion, an 18-year-old b-boy who came up from San Jose for the battle. His dance partner Jeremy, 17, agreed. “I used to be a gangster. Now I’m a dancer. Dancing opens up more opportunities.”

“(We) didn’t get in the competition, but it’s all good,” said Fabion, smiling as he practiced his moves in the middle of the crowd. “We just love to dance.”

21-year-old Eric “Eninja” Davis qualified for the battle. He’s been dancing with his crew The Turf Feinz for three years. They tried out in Los Angeles for a spot on MTV’s America’s Best Dance Crew. BET’s 106 and Park featured The Turf Feinz on its “Wild Out Wednesday” talent segment in New York City.

Davis practices a dance style called turfing. “It’s basically miming, and at the same time telling a story. How you feel is how you move.”

He believes that his dancing can help his community. “When we dance, we bring people together.” Because dancers in Oakland get respect in the streets, Davis explained, “they don’t have to watch their backs as much. They don’t have a reason to get into (altercations).”

Agreeing with Davis, Malia Jones said, “You don’t have time to be getting into trouble when you’re rehearsing something so difficult. In dance, you’re forced to collaborate. It creates positive relationships, and can be very therapeutic.”

Whether audience members gathered because they believe in the social power of dance or because they enjoy watching the back-flips and windmills of seasoned performers, many seemed mesmerized by the amount of talent on the dance floor. Navneet Grewal, 28, watched the battle with admiration. “I think these kids are amazing.”

Jones agreed that the talent was so hot, they “should get paid for what they do.”

A few dancers at the battle are making a living from their passion. A b-boy named Iron Monkey has won or placed high in many international battles as a member of Team USA. “I have been dancing for 17 years,” said the Alabama native who now lives in San Francisco. “I get paid to compete against dancers from all over the world.”

Getting to Iron Monkey’s level takes more than practice. He encourages aspiring dancers to do some research. “Learn about the pioneers of b-boying. Study the foundation. Learn all dance styles, so you can incorporate that into your own style. If you don’t know the history of this art form, you can’t do anything with it.”