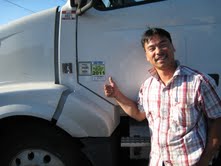 West Oakland resident Xue Pan, a port trucker for 10 years, shows off his truck, which has a sticker certifying its compliance with clean air rules until 2020. By Brian Beveridge.

OAKLAND, CA – While more than a thousand Oakland port trucks were replaced with taxpayer assistance or cleaned up to meet federal engine emission standards, companies serving the port say that non-compliant vehicles known as “dirty trucks” are still rolling through Oakland to pick up cargo.

In what California Air Resources Board officials call “dray-offs”, a clean truck picks up a container at the ship, then hands it off for a fee to a dirty truck in a nearby parking lot or warehouse facility. “Drayage” is the industry term for hauling port cargo. Dray-offs may even take place on Oakland city streets.

The state air board provided the money for truck clean-up and the Bay Area Air Quality Management District managed the program to clean up more 1,600 trucks. But state and local enforcement staff are uncertain whether dirty trucks are getting around the Port Drayage Truck Rule with the dray-offs.

“We’re aware of some locations where it may be happening,” said Manfred Oshner, the Air Resources Board’s manager of enforcement for the Drayage Truck Rule. “The trouble is, dray-offs are not illegal.”

Some local trucking operators say the problem is real and won’t get better until the state moves forward with emissions reduction rules for the rest of the trucks in California. “It’s gonna continue to be a problem until the city gets on the same page as the port with the CARB rule,” says Ron Cancilla, a partner in Impact Trucking, who operates a cargo transfer yard on Port of Oakland property. He says his competitors, directly across the street on City of Oakland property, do not have to meet the same truck emission standards.

It turns out that it may be more than just sour grapes between competitors. This loophole in the state Drayage Truck Rule means that while only clean trucks can enter port cargo terminals, any truck, can drive all the way through Oakland to pick up cargo on city property near the port. Those dirty trucks continue to spew deadly diesel soot all the way. Air Board scientists and public health experts say diesel pollution is the major cause of respiratory disease in California. Children in West Oakland have five times the state average for asthma-related illness.

Cancilla said he complained to the city attorney, as well as to West Oakland Councilwoman Nancy Nadel, and the Mayor’s office. He’s gotten no answers. The City Attorney’s office did not respond to numerous contacts for this story.

“It’s silly,” said Cancilla, “We’re all in the same business, but people on opposite sides of the street have different rules.” Other truckers agree there is problem, but some think the situation is necessary until the state passes the On-Road Truck Rule, which will cover the rest of the freight-haulers in California. That rule is meeting with heavy resistance from agriculture and long-haul trucking companies.

“I agree with the rules, they’re here, but the On-Road Rule needs to kick in sooner,“ said Bill Aboudi, owner of Oakland Maritime Support Services. Aboudi is the operator of the city’s 15-acre truck parking facility at the old Oakland Army Base. He says a few street turns probably take place at his facility, but he doesn’t think it is a significant problem. Enforcement of the emissions standard by the city would not affect his business economically.

“We tell our out-of-state customers, ‘at least you’re not in LA,'” where the rules are even tougher. Aboudi feels the dray-offs outside the port give out-of-state truckers who don’t know California’s rules a place to take care of their business. “It’s not a money-maker, it’s a relief valve,” he said.

The air board’s enforcer, Oshner, said they do random inspections of trucks coming out of the port cargo terminals to verify the data that truck owners put in the state on-line truck database.

But since compliance stickers are not mandated by law, there is still no way for a community member to know if a truck is polluting or not, except for that black smoke coming from the exhaust pipe.

A FOOTNOTE ON EMISSIONS

A “clean” truck by California Air Resources Board standards is one that meets US Environmental Protection Agency 2007 engine emission standards. All truck engines made before 1994 have been banned for use at the ports of California.
A clean truck can have a 2007 engine (as opposed to a 2007 model year, as some 2007 trucks have 2006 engines) in any truck, or it can be a 1994-2005 engine year with a CARB certified, after-market diesel particulate filter (DPF) installed on the exhaust system. The DPFs are what the state helped pay for, as mentioned in this story, at a cost of $16,000 on average per truck.
2005 and 2006 engine years are also considered “clean” until 2014. After 2014, only trucks made this year or later will be compliant with state standards. All the trucks the taxpayer just paid to retrofit and all the other pre-2010 trucks on the road will have to be replaced by Jan 1, 2014.