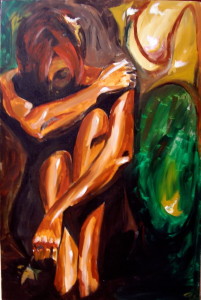 OAKLAND, CA – Nicci Butler is turning 40 years old this year, and the Oakland native has already picked her birthday wish. It’s a serious one. “I hope to live another decade without anyone I know committing suicide.”

After losing three people to suicide, Butler has found a way to help herself and other survivors – people left to grieve for loved ones who have taken their own lives. Last year, she co-founded the East Bay support group Survivors of Suicide Loss.

SSL is a public service born out of Butler’s personal experiences with suicide.

She was in the second grade when her uncle John “Bill” Hutchinson shot himself. Seven years ago, Butler’s close friend Samuel Gibson died when he deliberately overdosed on his HIV medication.

Butler’s hardest loss came when her friend Tonya Thompson took her life with a gun. Butler and Thompson met in 1992 when they were neighbors at Waterford apartments in Richmond. One day, Butler and her first husband were having an argument. Thompson overheard them and came to intervene because she was worried about their 2-year-old son. Butler remembers Thompson telling the couple, “The two of you can kill each other, but this baby is coming with me.”

The two women grew close after that. “We were more like sisters than friends,” Butler explains. “Tonya was the life of the party.” Butler points to a picture of Thompson showing off a big smile. She talks about her best friend so much that Butler’s young daughter knows Thompson by face even though the 3-year-old has never met her.

No one saw Thompson’s death coming. But looking back, Butler says there may have been some signs. “When Tonya was mad, she was really mad, and when she was sad, she was sad. She went from extremes.” Butler wishes her friend had turned to her for help, instead of taking her own life. “I felt guilty because Tonya and I we’re not speaking prior to her death.”

Thompson’s death hit Butler hard. She found it difficult to go to work. Her sadness shifted to hope when Butler stumbled across a suicide prevention brochure. She volunteered for a  survivors support group – an experience that inspired Butler to co-create SSL. Butler is now also a board member of San Francisco’s chapter of the American Foundation for Suicide Prevention. AFSP is hosting Out of Darkness Walk to promote suicide awareness. The walk will take place at Lake Merritt on Saturday, October 16 from 6:30 a.m. to 8:30 a.m.