I was a troubled student who had lost all sight of direction in middle school and officially dropped out in the 10th grade. Besides a desire to become a professional writer, there was nothing motivating me to do anything else with my life, where everything essentially was put on hold. I devoted countless hours each day towards improving my writing skills, but that frustrated my family and friends as they viewed my goal as an excuse to justify my decision to quit school.

It took a little while before I eventually realized that a professional writing career wasn’t anywhere close to becoming a reality due to my inexperience and lack of knowledge on the subject. I knew that I didn’t want to go back to high school, but also knew that I needed to obtain a diploma in order to be taken seriously. Recalling that an uncle earned a GED (High School Equivalency Certificate) as opposed to a high school diploma, I did some research felt like it was the perfect fit.

After I expressed the desire to pursue a GED, my father leaped into action in search of GED programs close to home. That ultimately brought me to the East Oakland Youth Development Center (EOYDC) where in eight months, I was able to obtain it. The change in scenery, classroom environment and most of all dedicated personal teaching by my GED teacher, Miss Anana Clark, kept me on track in accomplishing that goal. Earning my GED was one of my first major accomplishments and symbolized for me that anything was possible if you put in the hard work to make it happen. Looking to share other success stories other than my own, Miss Anana put me in contact with Danyell Henderson, a 2012 GED graduate who overcame high adversity making him the strong-willed person that he is today. Below is an interview I did with Danyell. 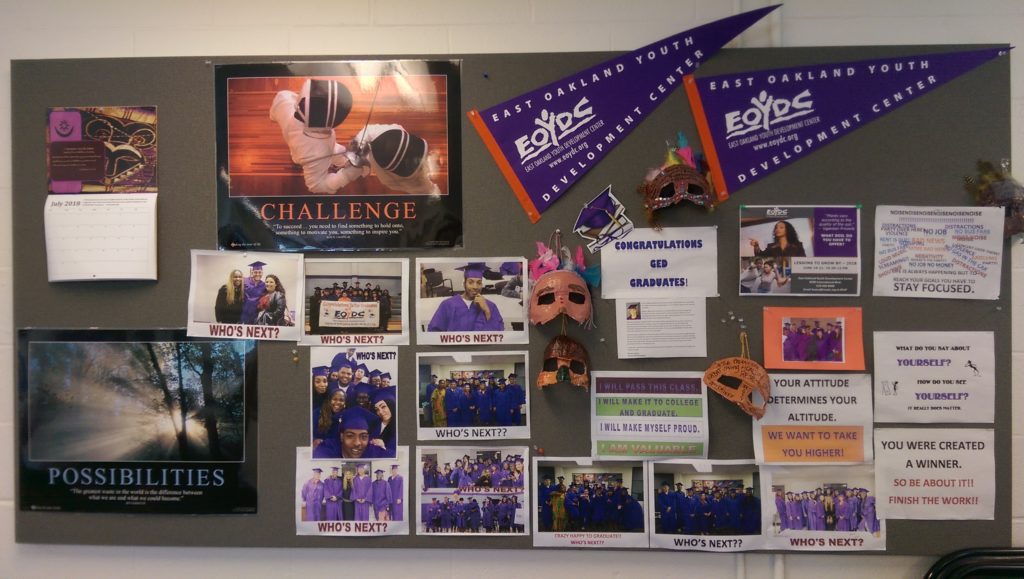 “I dropped out of high school in the 10th grade and didn’t have a direction of where to go,”  Danyell told me. “I grew up without a father and my mom took care of six kids by herself, so she really couldn’t be involved the way a parent was supposed to. I was away from home all day doing things just to kill time and after about three years I decided that there was something that I needed to do.”

“How did you find out about the GED program?” I asked.

“I had a friend that was in Miss Anana’s class and he told me about the program. Although school wasn’t for me, I gave it try.”

“What motivated you to finish?”

“Coming from East Oakland, I didn’t know any other option. I had friends selling weed, prostituting women, it was either take one of those options or take myself back to school.”

“Was obtaining the GED your main goal at the time or did you see this to be a part of a bigger process?”

“The GED wasn’t a goal at the time, it was a stepping stone. But once I finished and graduated was when I first found personal happiness for myself. That wasn’t what I was looking for when I started, but something that I was able to find. Getting that GED was the first start for me to be able to do everything that I am doing at this moment.  I’m about to transfer to Mississippi Valley State from the College of Alameda with three degrees.  Without it (the GED) and Miss Anana helping me, I would not be able to attend.”

“What was the difference between high school and the EOYDC program that made it work?”

“The difference between the EOYDC and regular high school was the setting, space and environment that Miss Anana set for her students. Miss Anana pays attention to all of her students. When I dropped out of high school, nobody called to see what I was doing; when I missed a whole month of class with Miss Anana, she called me everyday. It was the first time in my life where I was being educated. Miss Anana’s approach was very needed. She was very gentle and kept me motivated.”

“What would you like to say to anyone struggling with school or looking to follow a similar path such as yours?”

“School can create a better life for you. Had I taken another path, my life wouldn’t be as good as it is right now. It has opened opportunities that I never even dreamed of. I’m getting to see other parts of the world for the first time and that wouldn’t have happened had I not finished school.”

For me, being able to write this article and share a bit of my story alongside Danyell’s means the world to me as it symbolizes the beauty of fate and the unpredictability of the future. The lead up to this article came down to two different desires to have pizza for dinner. Miss Anana and I ran into each other when she was picking up pizza for her husband and I was picking up pizza for my boss. The timing and reasoning behind it was meant to be.

I did an interview with Miss Anana prior to speaking with Danyell, but soon figured out that it was impossible to fit everything into one article and decided that it would be best as a piece of its own. I look forward to sharing the second part with all of you in the future as it’ll be my first article officially as an Oakland Voices alumni.