The combined party, fundraiser, and awards ceremony, occurred in the museum’s sculpture garden.
It was also a 10th anniversary celebration for Oakland Rising.

The awards celebrate the work of Oakland’s social justice warriors – the activists, organizations, and other leaders who advance community-led solutions supporting the interests of working-class and immigrant communities of color.

Award recipients include a woman who’s bringing a racial justice lens to transportation governance on the BART board, current and former leaders of  organizations who are now stepping up to run for office, a neighborhood-based coalition that is taking power into its own hands in the wake of neglect by its city council members and  local businesses that truly value community.

In her opening remarks for the awards, Jessamyn Sabbag, Executive Director of Oakland Rising,  encouraged the crowd to prepare for the upcoming and future elections by growing a reliable base of progressive voters.

“We have to learn how to stand for our values in face of transactional and short term thinking, ” she said.
“We’re stepping into governing in a way that hasn’t happened before… and we’re doing the work to build power.”

That message was re-emphasized by Lateefah Simon, winner of the Government Official Townie, who was elected to the BART Board of Directors running on a platform of equity, dignity and justice.

“We need an an electoral system where we can elevate leaders from our community,” Simon said. She spoke of combining  love and action with community building to change Oakland politics. “It’s about a having community of loving people surrounding us, ” she said. “We can create a community of love that is absolutely accountable, that is loving and  just. We are all we have.”

The new multi-organization and multi-area Congress of Neighborhoods  won the Townie Volunteer award since it is basically a volunteer organization with staff support from organizations that partner with Oakland Rising.

Huba Sherry, who accepted the award with Angie Tam, said she was excited by the  launch of the Congress. “We have formulated a people’s agenda on topics such as safety, illegal trash dumping, jobs, and gentrification,” Sherry said.  “That idea of people power is changing the dynamics of East Oakland. ”

Nehanda Imara of East Oakland Building Helathy Communities (EOBHC) was one of the award presenters.  “This is an awesome movement. It’s about building relationships between neighbors and between organizations,” Imara said. “We’re going deeper, bigger and broader. People in East Oakland want to see change. Organizing for building power is a marathon, not a 20- yard dash.”

Regarding Oakland’ Rising’s 10th anniversary, Sabbag told the audience she was proud of the work the organization has done over the past decade.
Oakland Rising has worked on Costa-Hawkins rent control limitations and also on Oakland’s Tenant Protection Act which outlaws landlord harassment and neglect as methods of evicting tenants.  In 2014 it worked to pass Measure FF by 82 percent, increasing Oakland’s minimum wage and providing workers with paid sick days.

“I loved the diversity of crowd (at the Townie Awards) and I’m proud that people in this city recognize the efforts to preserve that diversity and culture of caring for each other and honors the people and organizations that do this on a day-to-day basis,” Davis-Howard said.

View a 90 image photo album from the Townie Awards HERE 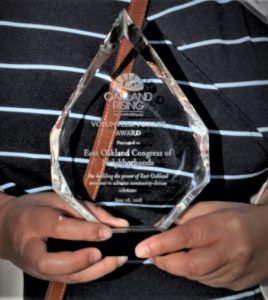 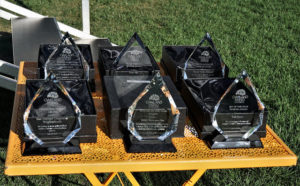