A Palestinian Nakba commemoration/demonstration was held on May 15 outside the Israeli consulate in San Francisco. Over 1,000 Palestine supporters turned out to mark the 70th anniversary of the Nakba (the Catastrophe), when over 750,000 Palestinians were terrorized, forcibly displaced, and often killed, before and after the Israeli declaration of independence on May 14, 1948. 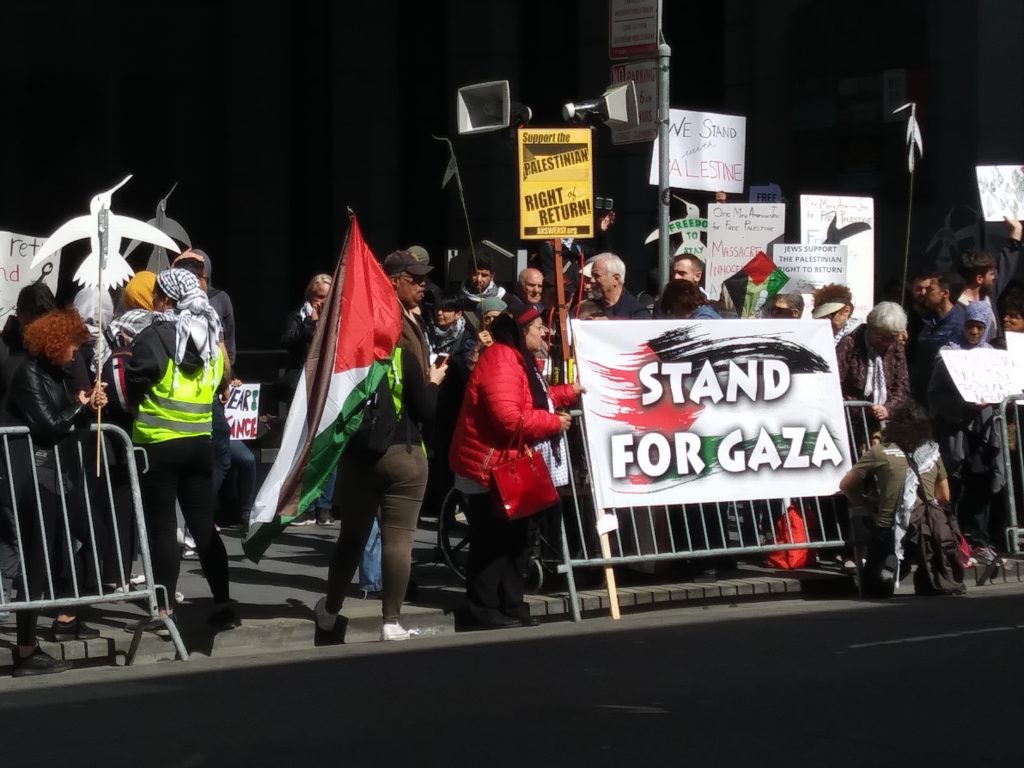 Gathering at the beginning of the commemoration/demonstration

The demonstration was organized over several months by the Palestine Action Network (PAN), a coalition of organizations including the Arab Resource and Organizing Center (AROC), Jewish Voice for Peace (JVP), Middle East Children’s Alliance (MECA), NorCal Sabeel, and the Palestinian Youth Movement (PYM). Several of the organizations are based in the East Bay, including Oakland. 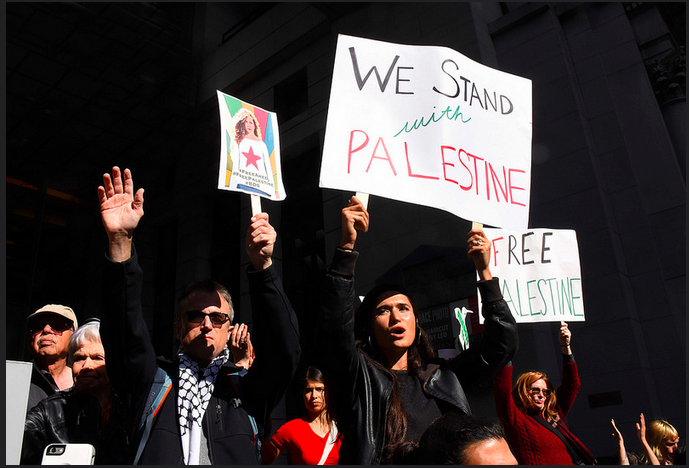 Why did people come to this demonstration? Ramah Awad (with PYM) was born in the U.S. to Palestinian parents and attended high school in Ramallah. “I came today to celebrate 70 years of (Palestinian) resistance to (Israeli) colonialism and occupation, and to honor the almost 60 people killed in Gaza (yesterday), and the thousands of refugees.”

JoAnn Consiglieri (with NorCal Sabeel) and Fran Dayad came with a group from Sonoma. Dayad wore a sign indicating her Jewish background and commitment to Palestinians. The sign read, “I am an American Syrian Jew with the heart of a Palestinian.” 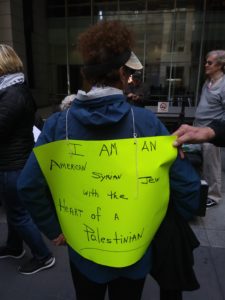 Fran Dyad with her poste

Consiglieri came with a homemade kite with the image of Handala, an iconic character created by the political cartoonist, Naji al-Ali, who was born in the Galilee, but grew up in a Palestinian refugee camp in Lebanon. 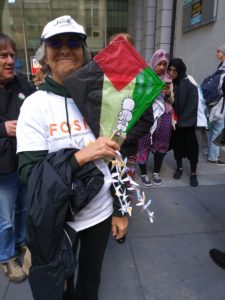 JoAnn Consiglieri with her kite with an iconic Palestinian image

“I’ve been to Palestine twice and it’s unconscionable what the Zionist Israeli government is doing to the people of Palestine. (Archbishop) Desmond Tutu from South Africa said that the apartheid in Palestine is far worse than it ever was in South Africa. They have separate roads and the potholes on the Palestinian side are awful and the freeways for the Israelis are like the freeways in America,” Consiglieri said. 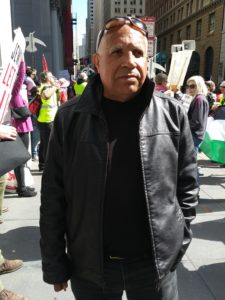 Ziad Abbas from MECA at demonstration

Ziad Abbas, from MECA, was born and grew up in the Dheisheh Refugee Camp in Bethlehem. “My family, they are refugees from two villages. They were uprooted in 1948. Zionist groups started attacking the villages and towns. They started attacking (my parents’) village. They killed three people. So most of the people moved to the mountains. That day in October, when they left the village, my mom, she had two children. My sister was two years old and my brother was two weeks old. My mom closed the house and took the two children and just a few things to survive for one, two days. She thought they were coming back after the bombing stopped, but they (the Zionist groups) kept pushing them back. But, it’s now 70 years and we never went back,” said Abbas. 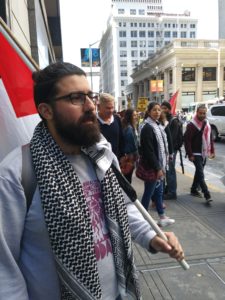 “The Palestinians have been protesting peacefully for years. This is the 70th year of the Nakba and Palestinians are continuing to protest. The U.S. is supporting Israel through our tax dollars. The U.S. declaration of Jerusalem as the Israeli capital is a provocation,” said Sharif Zakout (with AROC). “It’s important to show up and make sure we’re actively trying to stop the violence.“

Speakers from various organizations addressed the crowd. “There are now 7.2 Palestinian refugees living around the world. The population of Gaza is almost 2 million. Today is the date we will remember the massacres and forced dislocation of the Palestinian people. The Nakba is a time of mourning, of dispossession. A time of waiting. A time of perpetual resistance. But today, we see that memory lives,” said Judith Butler, with JVP. 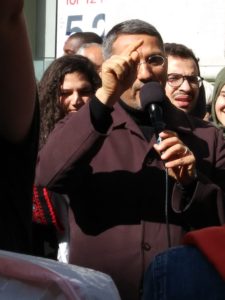 Hatem Bazian, professor of Islamic Law and Theology at Zaytuna College and founder of American Muslims for Palestine, called out the complicity of the media and politicians in events that have been occurring in Palestine/Israel: “Let us be clear. It was a massacre that occurred yesterday (in Gaza, when about 60 Palestinians were killed and thousands injured by sniper fire). It was committed by politicians who knew exactly what they were doing. It was a premeditated massacre. Systematic, deliberate,” said Bazian. “The media must be held to task. We need to challenge not just the shooters, but the media and the cowardly politicians,” he added.

There were many signs and banners. There were also chants, some often heard at peace and justice-related demonstrations (e.g., “No justice, no peace”), but others more specific to Palestine, including the following:

“Palestine will be free”

“Netanyahu, how many Palestinians have you killed today?”

“Israel, Israel, you can’t hide. We charge you with genocide” 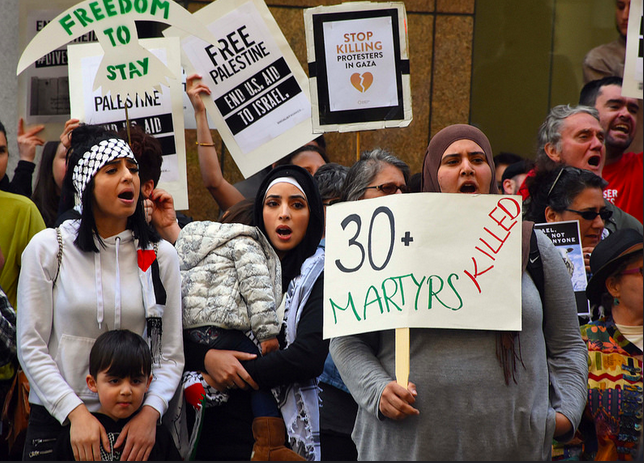 At one point, the names of Palestinians killed in the recent killings by sniper fire in Gaza were called out, in order to remember them.

One hour after the demonstration began, the crowd began marching down Montgomery St. to Market St and, eventually, to the federal building on 7th St. 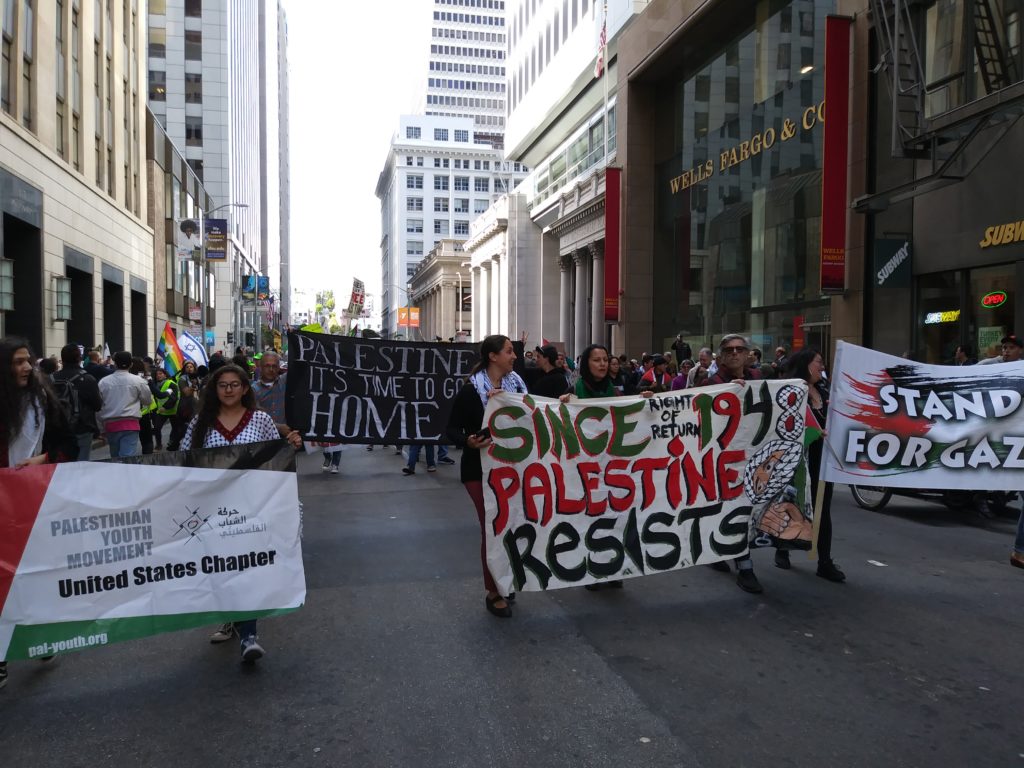 Spectators gathered on the sidewalk, watching, listening, and sometimes reading flyers and taking pictures or video clips. Drivers honked their horns. I overheard onlookers explaining to each other what they understood was happening. For example, one young man was explaining to another man, a stranger, that thousands of Palestinians had been dispossessed in 1948 after Israel was created.

The ethnic cleansing of 1947-48 continues today as Israel kills peaceful demonstrators, such as has happened in Gaza in recent weeks; appropriates large swaths of land in the West Bank; forces Bedouins off their ancestral lands in the Negev into towns (reminiscent of how Native Americans were forced into reservations in the U.S.); encourages the building of huge illegal settlements in the Occupied West Bank; allows Jewish settlers to force Palestinians out of their homes in Jerusalem and elsewhere in the West Bank; and prohibits Palestinian refugees from returning to their homeland.