She gave us everything 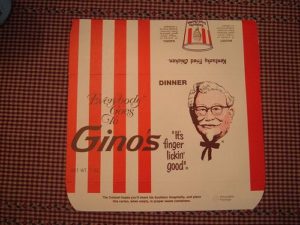 One of my mother’s employers

“AAAAAAAAAAAAAA,” my mother screamed! My sister and I, then school age, ran down the steps of our shared house seeing the back of our father as he ran out of the front entry-way.

Left, right, through the dining room to the kitchen we went to find our mother dripping a large amount of blood from a knife in her back. In panic and terror, we immediately wrapped our arms around her legs and waist. She consoled us, saying, she was okay.

My mother was born on a farm in a small town approximately 150 miles outside of Louisville, KY to a large family that included 11 brothers and sisters. She was a quiet, serious woman, a great cook and seamstress and she liked to socialize. Her hobbies included music appreciation, traveling and bowling. She was a first generation college graduate at 30. Her skill trade was accounting and she provided tax preparation for her local family members for free.

Although alienated and mistreated by her distant family members, she packed me and my sister in her car to travel 10 hours from Pennsylvania to her hometown faithfully, about every three years or so for reunions and funerals.  During her only trip to our home, I overheard one of my mother’s sisters say my mother’s furniture was cheap. On several occasions, I witnessed that after disagreements, another of her sisters would not call her for months until my mother called her.

For at least a decade, every year, that aunt and her family celebrated Thanksgiving and Christmas at our house, until one Thanksgiving she and her children didn’t show up. Afterwards, the holidays were split between the two homes.

My mother and father divorced when I was 6, and my sister, 3. As a single mother, she made some of our clothes, including our prom dresses. She took us to events with her and her friends from work, especially bowling and to picnics. Instead of “going out,”  she hosted house parties on occasion. There was always music playing in the house and when she sent us to bed, I’d hear her laughing at television shows such as Taxi and Mary Hartman, Mary Hartman.

While at work, when my sister and I would bicker, she’d patiently handle our matters by phone. I remember it was so much fun when we went to work with her when she worked at the naval base and we’d write in the military books. We had a family dog, Brownie, attended Girls Scouts and summer camps. We took annual school pictures, attended all school trips and were regularly taken to dental and medical appointments. As teenagers, we never heard complaints about our music being too loud or about us having birthday parties or visitors.

Loyal to her employers, she only had three or four employers in her lifetime. She worked two jobs many of her years, including at Kentucky Fried Chicken, then Gino’s. I remember once, she called us to meet her to eat. She never brought it home though, always cooking us nutritious meals including a meat, starch and vegetables at dinner and plenty of fruit and milk – three squares and snacks daily.

We had a babysitter who when I told my mother she hit me, she was replaced. A hair braider complained my sister and I ate too many of her cookies – replaced. She had a few boyfriends before being remarried at 58. I only saw her upset by one of them and for just one day! When my sister and I became adults, she was able to travel more;  she met her husband in the Caribbeans.

Living in their hometown, my father sent child support and we visited him and the grands occasionally. We also spoke to them on the phone regularly, however, most of the “burden” of parenthood “fell on my mother’s shoulders.” I never knew why my mother didn’t allow my father to take us to the corner store that evil day that made my father so angry. She’d said no on other occasions. Once I had children and their father wanted to stop by to see or take them whenever he chose, I learned how disruptive it was to the household.

I also learned what children miss with one income and if only one parent takes full responsibility of the role. My mother earned a reputation for being cranky, but was probably just tired. She frowned, was short-tempered, complaining in an angry manner easily. Once I had to correct a younger family member for discussing this with a non-family member.

My mother did, however, spoil us. As a single parent myself, whenever I needed or wanted something, from babysitting to a loan, she’d most likely oblige me. Her two granddaughters, my children, had two Christmases, at our home and at hers!

Ironically, 20 years later, my father hired my mother to do his and his wife’s taxes going back 20 years. A decade later, my daughters and I relocated to California and when my mother visited, my father, who had moved to California, invited her into their home and drove her to the airport alone even though I wanted to go along for the ride. When he visited us back East, she took him “out on the town.” They had married at 18.

After the incident, a few years later, the visits and calls were just as they used to be.  She passed away of natural causes in 2005. He lives in the Bay, has a set of twins and two adopted children. We rarely speak but he can be counted on in desperate times.
#resiliency, #overcomingadversity, #hero, #parenthood, #motherhood, #family, #roles, #values, #stability, #homelife, #forgiveness