Leaving the streets behind 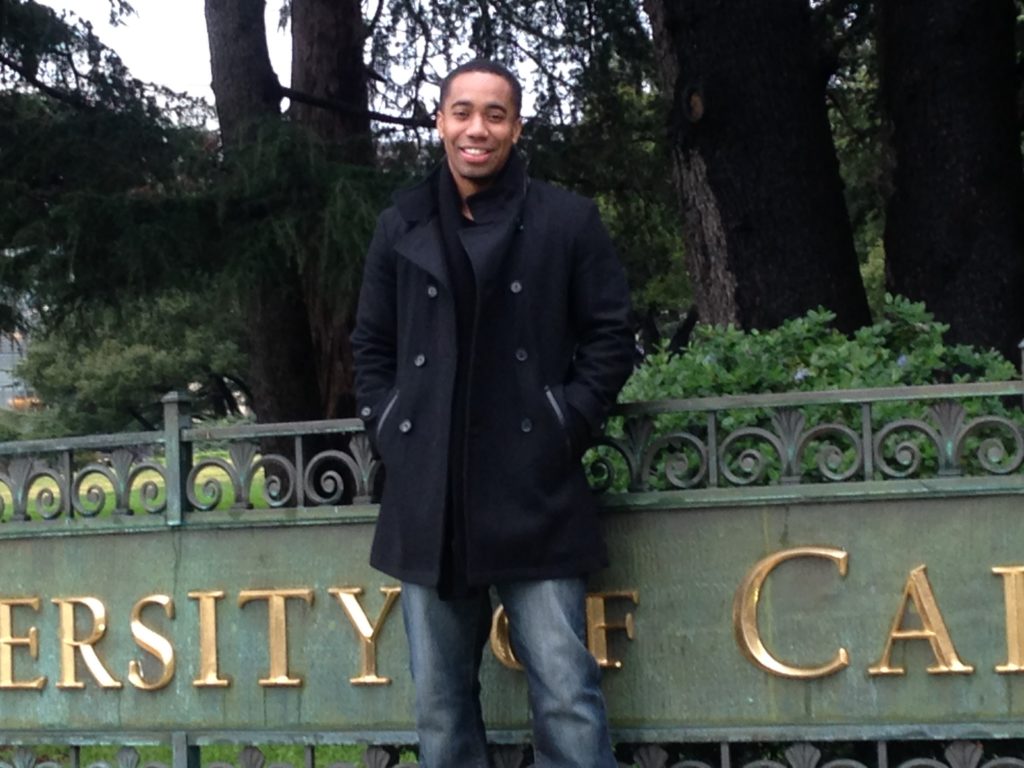 Prospective Berkeley Law student Clarence Ford, 28, has a 360-degree perspective on the law most lawyers lack. He was first arrested for marijuana possession at 17. Ford’s rap sheet eventually included armed robbery — three felonies as a minor and two as a young adult — and he spent nearly four years behind bars. Later, after his release and graduation from UC Berkeley, his sister was murdered during an armed robbery.

Ford’s story is a classic example of the draw of the streets and the arduous struggle to break the cycle and take another path. His own father was dealt a rough hand; his parents (Ford’s grandparents) smoked crack and sold drugs during the crack epidemic of the 1980’s and ‘90’s. His parents split up but his mother was strict, doing everything she could to make him “walk a straight line.”

High school was easy for him. He wanted to be on the basketball team, but he wasn’t tall enough. When basketball was no longer an option, he turned to the streets, selling drugs and “doing a lot of stupid stuff.”

He ended up in juvenile hall. When he got out in 2006, he enrolled at Chabot Community College and considered pursuing a degree in nursing. But looking back, he realizes he didn’t have the life skills necessary to stay straight.

As part of his community service obligation, he was assigned a job gardening and landscaping. But he continued selling weed.

The Berkeley Youth Alternative offered him a job doing community research for the City of Berkeley’s Department of Public Health. He started looking at his community differently, seeing some of the problems as public health issues. The project supervisor pushed Ford to go back to school.

Still the street remained omnipresent in his daily life.
“There was still a feud between my ‘hood and the next ‘hood,” he said. “There was a loyalty to my friends, my circle. I never left the house without my gun.” He served one month at Santa Rita Jail before the charges were dropped in a case of mistaken identity in December 2006. A little more than a year later, Ford wound up serving 36 months for armed robbery, in Mobile, Alabama where he was attending Miles College.

After his release, he had the typical experience of a former inmate — he couldn’t find work. But he eventually found a job with Safe Return Team, a Richmond program dedicated to supporting people adapting to home life after being locked up, doing policy research. For once, his incarceration actually opened the door to a decent wage of $20.00 per hour.

“I was learning about mobilizing the community, advocating for certain policies,” he said. He changed his major to sociology and earned his Associate’s Degree from Contra Costa Community College in 2014. He graduated from UC Berkeley last May with a Bachelor’s in an interdisciplinary major in American Studies with a focus in ethnicity, law and public policy. He plans to apply to Berkeley Law School and would like to work in a think tank as a policy adviser.

Ford credits UC Berkley’s Underground Scholars’ Initiative (USI), a program to help students who have been incarcerated, for providing the environment and connections to succeed. He described USI scholars as an inspirational and motivational support group.

“It feels good to be part of an organization that is recognizing and asking our advice. We are almost like a family,” he said.

His advice to the currently incarcerated: “Change the way you view yourselves. Prison is a really dehumanizing process, meant to dismantle self-esteem. We need to understand we are valuable; we are not throwaways.”

After his sister was killed in December, Ford said he feels remorse for his past behavior.
“I feel like to be doing that in the first place is coming from an area of not having regard (for people’s lives),” he said. “If you grow up in the gang culture, one thing is ‘don’t harm innocent people.’ I had no intention of harming the person, but I shouldn’t have been doing that in the first place.”