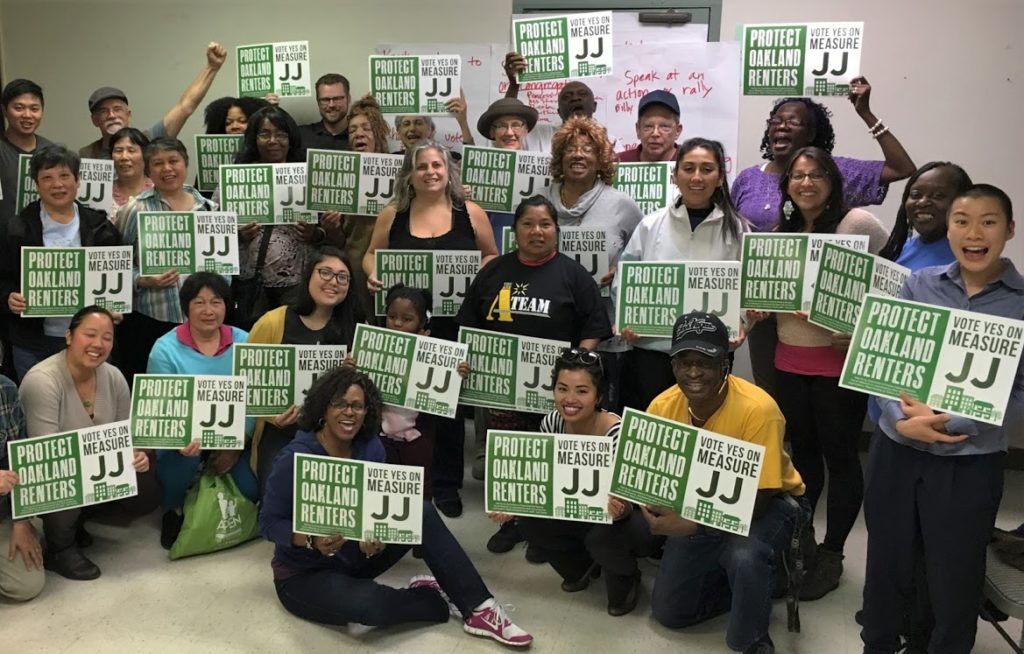 This election season, community-based organizations are getting out the vote on a number of local and statewide initiatives with tactics ranging from the old school — knocking on doors and phone banking — to the “what’s happening now” in social media, including Facebook, Twitter, Instagram and an app used by the Bernie Sanders’ campaign.

“Oakland Rising is talking with more than 20,000 voters from low-income, immigrant and communities of color in the flatlands to make sure that folks understand how critical local ballot measures and state propositions are to our daily lives,” said Jessamyn Sabbag, executive director of Oakland Rising, a collective of nine justice and environmental groups. They started months ago. “With 27 state and local initiatives on the ballot, we have done the hard work of analyzing and endorsing all of them from a racial justice and economic justice lens.”

On a Saturday in mid-October, canvassers squeezed into a small room at Oakland Rising’s downtown office and planned an afternoon of precinct walking in support of state Propositions 55, 56 and 57, and Oakland’s Measure JJ. In another room, half a dozen phone workers sat in small padded cubicles while a new group of canvassers were trained on what to say and how to interact with Oakland voters.

(Proposition 55 maintains the current tax on the wealthiest Californians. Proposition 56 increases the cigarette tax by $2 per pack with a similar increase on other tobacco products including e-cigarettes. Prop 57 increases parole chances for felons convicted of non-violent crimes. Measure JJ strengthens eviction protections.)

Oakland Community Organizations (OCO) has run several canvassing and get-out-to-vote campaigns since late September. Volunteers have been knocking on doors to encourage voters to support a variety of local propositions.

“We are focusing our organizing efforts in Oakland on those who had not voted in 2014,” said Rev. Damita Davis-Howard, an organizer for OCO.

The organization decided which initiatives to support after a three-month discussion process, focusing on housing, health care, education and criminal justice. For more information visit the OCO website: www.oaklandcommunity.org.

For its part, East Bay Alliance for a Sustainable Economy (EBASE) is focusing on housing and Measure JJ, which extends just cause eviction protections in Oakland to housing units built before 1996; requires annual notice of cost of living increases; and, critically, puts the onus on landlords to justify rent increases above cost of living levels.

Jahmese Myres, campaign director, said they’ve found low-income East and West Oakland residents very receptive to the measure.
“People feel displacement so personally,” said Myres. “If not directly themselves, it has indirectly affected family, friends, co-workers, childcare workers, teachers, and nonprofit workers. Thousands more renters will be protected. JJ will help keep them in their homes, preserve the diversity of our city and keep neighborhoods and communities together.”

She said EBASE has been doing voter outreach, talking to faith communities through its Labor in the Pulpit programs and will be knocking on doors and phone banking all the way up to election day.

Back at Oakland Rising, a team of 44 paid voter outreach workers and more than 100 trained volunteers for door-to-door outreach are working to get out the vote, with an emphasis on voters younger than 34. With that group in mind, organizers are using Facebook, Twitter, Instagram and Hustle app, used by the Sanders’ campaign.

“Many of our volunteers live in the neighborhoods they will canvass in,” said Beth Gunston, strategic partnerships director. “We do large scale outreach and voter engagement. We run multiple campaigns each year, not just at election time.”

Later that Saturday afternoon in October, their staff and volunteers were knocking on doors all over Oakland.

To view the photo album for this story, visit  http://bit.ly/2ePRvED.