I Am Because We Are – OCO celebrates

Oakland Community Organizations (OCO) member Tracy Phillips scanned the tables spread out at the Eastmont Mall office during the group’s annual holiday gathering.  “Like bees in a hive,” she mused. It was the culmination of a year celebrating the theme of Ubuntu — a southern African philosophy which underscores human interdependence and is sometimes translated as “I AM because WE ARE.”  The festive potluck celebrated both togetherness and, strikingly, animated conversations of the organization’s ongoing work.

As I moved from table to table, I learned of OCO’s 38- year history from its founding at three E. Oakland churches and how that legacy continues through its coalition of more than 70 church congregations, schools and allied organizations.

Fran Matarrese with her grandson Joe and his fiance Mandy

Joined by her grandson and his fiancé, Fran Matarrese told me about OCO’s first meeting when Fr. Oliver Lynch invited two Saul Alinsky-trained organizers to St. Elizabeth’s Church in the Fruitvale in 1977. “With St. Louis Bertrand and St. Bernard, we were on the ground floor of neighborhood organizing and represented the body of E. Oakland,” she said. From the initial assembly of several hundred residents, a core group of 30-40 set out to make changes.

Sitting nearby, one-time OCO Co-Chair Bea Bernstine described those early days as the work shifted from getting stop signs, speed bumps and streetlights to the more sustained effort of going after drug dealers, lobbying for housing and improving the public schools.

“We helped build housing in Jingletown and fought for lower class sizes in the public schools,” Bernstine said. “The local charter schools, Ascend and Arise, are ones we created. Those were real tangible changes. Part of of the difference nowadays is that the things that need to be changed are systemic.”

Schools remain a theme of OCO’s ongoing work as typified by Raul Ajqui, the parent of a ninth grader at Fremont High. Taking a break from his meal, he told me, “I have a daughter and want her to be successful, receive a good education and be safe.”

Every Monday, Ajqui leaves his carpentry job an hour early and fights traffic to attend evening meetings which focus on supporting teachers while exploring possible changes to improve the school. 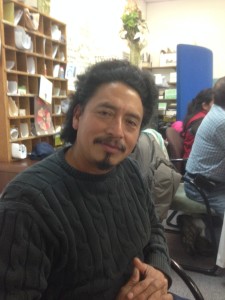 “It’s been fun,” he said. “I’m learning so much about the school. We study and talk about issues affecting Fremont High. In the spring we will invite the community to a large meeting when we will bring our recommendations before school authorities.”

Back at First Mt. Sinai’s table, I spent time with Sholonda Jackson-Jasper and her family. Jackson-Jasper exemplifies the involvement described  by Bernstine: taking on systemic issues in a personal way. She got started by participating in Friday evening Ceasefire walks — OCO-supported walks through the neighborhoods most impacted by gun violence. They are hosted  by four E. Oakland congregations, in rotation,  including First Mt. Sinai.  “The next thing you know, I was going door to door and phone banking for Prop. 47,” she said.

Jackson-Jasper had a personal stake in the statewide referendum which passed at nearly 60 percent in 2014; as a result, her drug-related felony convictions were reclassified to misdemeanors which were subsequently expunged. Along the way, she completed her college degree and currently works as a caseworker for Operation Dignity, an agency that provides transitional housing and wrap-around services for homeless veterans. 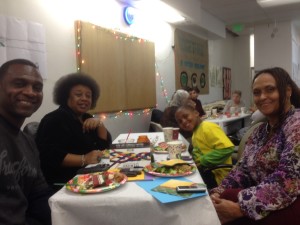 Her work with OCO focuses on ending mass incarceration and its harmful effects. “I’ve lived the system,” she told me. “There are no resources inside. They send people with addictions where you don’t get any help. You just rest up a bit and return to the same neighborhoods. You can’t live with family in subsidized housing. There’s no food stamps or general assistance. You’re forced back into hustling and petty crime and pretty soon you get arrested again. If there’s no one to meet returnees at the gate to provide support, it’s pointless.”

Jackson-Jasper, who will begin a masters program in social work in 2016, told me, “mass incarceration, housing, gentrification, rising rents are all connected. I’m not special. I just got a break. There’s lots of folks out there just like me who just need a break.”

Judging from the good cheer and dinner conversations at this holiday party, the Ubuntu spirit of interconnectedness and resolve is alive and well at OCO, poised in the coming year to continue to raise its formidable community voice in addressing the array of structural issues confronting East and West Oakland.