In keeping with its leadership role in recreating government in the digital era, Oakland last week hosted the Code for America (CfA) Summit, one of the nation’s top events in the movement that is sometimes called Government 2.0. 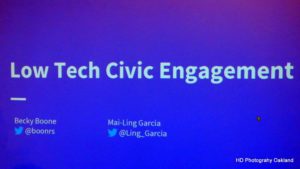 “It means an enormous amount to the staff and community of Code for America that we could hold the CfA Summit in Oakland this year,” said Jennifer Pahlka, CfA founder and CEO. “Oakland is not only home to many staffers, and a key partner, but is also a community with values that reflect the values of public service.”

Founded in 2009 to reduce a widening gap between the public and private sectors in the effective use of technology, CfA helps government work more like an Internet company.

For example, it supports local “Brigades” in various cities – groups of programmers, civic hackers and other community volunteers who work with local governments in civic technology, design, and open access to government data.

The annual three-day summit brings together technology leaders, civic leaders and activists and government personnel interested in the tools and practices of 21st century government.
This was the fifth annual summit, attracting about 1200 participants.

At the opening session, Mayor Libby Schaaf said Oakland is “the hottest new center for urban innovation in America.” She called for building “Digital Bridges” to communities that are on the wrong side of the former digital Divide and growing “techquity” throughout the city.

Schaaf noted that Oakland has a high percentage of smart phone users at every demographic level and minority youth have even higher use rates.

“Through Oakland’s partnership with Code for America, we are establishing a culture that empowers city staff to develop tools that spark civic engagement, increase equity, and make our government work more effectively for our community,” Schaaf said.

Oakland has been a CfA testing ground. It is part of the Digital Front Door research project that builds up-to-date websites for American cities.

Over the last three years, Open Oakland has produced major web applications such as OpenBudgetOakland.io, so residents can visualize the city’s finances and OpenDisclosure.io, to track the origin of political campaign contributions. Open Oakland and Brigades from Sacramento, San Francisco and San Jose are working together to develop an OpenDisclosure framework for other cities.

“The fact that we have a leadership team, an upcoming regular newsletter, an on-boarding process (for new volunteers) and also meet weekly were quite inspiring to others,” said Neil Planchon, volunteer director at Open Oakland.

At the summit, John Baldo, a regular volunteer with Open Oakland, demonstrated some of the group’s internet apps. “Oakland is lucky to play host to so many civic innovators from around the country. The summit felt like a great opportunity to showcase our small but vibrant city’s culture, progress and challenges,” Baldo said.

Mai-ling Garcia, Oakland’s Digital Engagement Manger, co-led a talk on low tech approaches to civic engagement. “Engagement with technology means nothing without human impact.,” Garcia said. “We need to use technology as a bridge to reach members of our community who don’t normally participate in providing public feedback.”

“We are deconstructing our city services to make them easier to access, with clear, simple information in plain language, and meeting people where they are with the technology they have,” Boyd said.

Whitney Barazoto, executive director of the Public Ethics Commission said she’s always impressed by the talent she finds in Oakland. “And now that the Summit is taking place here, I think Oakland has the potential to shape many of the on-going conversations about the role of tech in our society,” she said.

In fact, next year’s summit also will be held in Oakland.
Videos from the CfA Summit are available on the CfA YouTube channel HERE [https://www.youtube.com/user/CodeforAmerica]