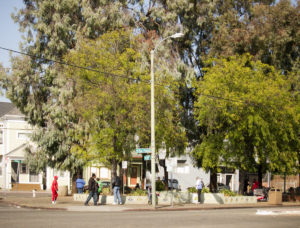 Occupying less than two-tenths of an acre, Saint Andrews is one of West Oakland’s tiniest parks. It has also become the center of local controversy. Some residents and business owners want to see the park - which they call a haven for illegal activity - shut down. But others say Saint Andrews is a refuge for people who may have nowhere else to go. By Deborah Sherman

OAKLAND, CA – In dense urban areas, community parks are designed to offer recreation, relaxation, and respite – a place to walk the dog, play chess with friends, or simply sit for a spell on a shady bench.

This was surely the intent for Saint Andrews. At just 0.17 acres, it’s one of Oakland’s tiniest city parks. It’s a small concrete triangle bordered by 32nd and Filbert Streets, and a hardscrabble stretch of San Pablo Avenue.

Long-time nearby residents say the park has become a haven for drug dealing, prostitution, violence, and blight. Though they acknowledge these activities have persisted in the park for years, they say it’s reached a new level recently that is unsafe, and unacceptable. Banding together as the West Oakland Community Alliance, they’ve issued a formal written statement. “The park constitutes a serious threat,” it reads, “to the lives and health of those living and working in the vicinity of the park.”

Years ago the city upgraded Saint Andrews with new landscaping, picnic benches, and trash cans. It’s all shaded by large Eucalyptus trees – a tiny island of green in a heavily trafficked commercial zone on the edge of a  residential neighborhood. The surrounding area is dense with halfway houses including the California Hotel, as well as senior centers, artist warehouse conversions, auto body shops, and lower income single family homes.  It’s a mix that brings a diverse population to the park. That includes many people with extremely limited incomes – seniors, homeless people, recyclers with their shopping carts, people struggling with addiction, and those who make a living selling drugs and sex on the street.

On a recent warm and sunny weekday afternoon, the park was full to the brim with nearly 50 people packed into its tight borders. Many of them were drinking from small brown paper bags obtained from Bay Area Liquor & Market across the street on San Pablo. Men stood at each corner of the park, hailing cars as they drove by slowly.

According to local residents and business owners, the park is notorious for being the spot to buy drugs in this part of Oakland. They claim it attracts buyers from as far as Richmond and San Francisco. They say Saint Andrews is considered by many a free zone – a place where police enforcement is non-existent.

Ntiendo owns a medical supply store just a few doors down from Saint Andrews. “I don’t want to talk about that park!,” he shouted, throwing his hands up in frustration. “Nothing will change.  Why don’t you ask the Mayor of Oakland?  He knows about it.  The police know about it.  And still nothing gets done.”

The Mayor’s Office said local neighborhood issues of this type are really the jurisdiction of the City Council. Calls to the Oakland Police Department were not returned, but Darren Allison, the OPD’s new neighborhood captain, did agree to attend tonight’s WOCA meeting.

Carletta Starks, Community Liaison/Policy Analyst for City Councilmember Nancy Nadel, said “Saint Andrews is a priority for her office,” and various means of dealing with issues in the park have been attempted, though “none successful to date.” These include removal of parking to increase visibility for police enforcement efforts, and more frequent park clean-ups.

Nadel said city officials are just as frustrated as residents. “The problems don’t have easy solutions; [they] are not due to lack of concern or trying many options.”

People who actually use the park say they are aware of the complaints, but view them as attempts to push disenfranchised populations out of developing neighborhoods. A group of young men seated at one of the park’s concrete chess tables said, “Most of these folks are transients.  They’ve got nowhere else to go.  These are the people you see sleeping in doorways.  And they just want a place to rest in the shade.  Most of what goes on here is chill.”

They dispute the degree of criminal activity, though they acknowledge that many people in the park drink and use drugs on the premises.

Jasmine, a nurse from Berkeley, said she frequents Saint Andrews on weekends, and doesn’t find the park dangerous.  But she acknowledged that many of the park’s visitors are in dire need of assistance. “Some are suffering from addiction issues, mental disorders, or just general lack of opportunities.” She hoped more outreach could be done at the park to get people access to services such as affordable housing, recovery programs, and educational & vocational training. “Everybody needs opportunity,” she said.

WOCA members, long frustrated with the degree of illegal activity in their neighborhood park, are taking action. The group meets every week at a local artists’ warehouse, and has started formalizing its complaints to police, city government, and park officials.  Their concerns include drug dealing, prostitution, used needles & public defecation.

McClymonds High School, Hoover Elementary School, and St. Mary’s Preschool are all nearby, and they also worry about children’s exposure to such activity.  “What kind of example are we providing for the kids if that’s what they see everyday on their way to school?,” one resident asked.

WOCA members feel these activities have escalated recently, perhaps due to the closures of several other local parks, including Union Plaza Park, and the 25th Street Mini-Park.

Some residents are motivated to actually close Saint Andrews, while others want to see renovations to the park, rather than outright closure. They fear shuttering one more park will simply push the problem elsewhere, perhaps even deeper into residential neighborhoods.

At WOCA’s most recent meeting, City Councilwoman Jean Quan came to hear the residents’ complaints and offer recommendations. She is known in her district for her efforts in cleaning up crime hot spots in East Oakland. Quan described how residents there helped shut down an illegal drug market by calling drug hot lines and police with their complaints. She suggested to WOCA members take similar action, and told them to attend Neighborhood Crime Prevention Council meetings.

What also helped improve the East Oakland neighborhood, Quan explained, was getting officers to take their breaks in the area, and installing traffic cameras to track criminal activity. “The efforts took 8 months, but they worked,” she said.

Residents asked her about what it would take to actually close Saint Andrews. “It’s very difficult,” Quan explained, because the City of Oakland owns the park. Closing it would require community consensus, which would likely stall an already lengthy legal process.

Instead, she directed residents to build a coalition with local businesses, schools, churches, senior centers, and neighborhood halfway houses, in addition to reaching out to local government officials.  All of these organizations have vested interests in having a local park that’s a healthy and happy place for the surrounding community.

Saint Mary’s Senior Community Center sits across the street from Saint Andrews, and is already working to improve it. The center has adopted the park, sending volunteers over to regularly clean it up. Saint Mary’s also offers 12-Step Recovery Services every Thursday morning, right in the park.

WOCA members have formed an alliance with Saint Mary’s, as well as McClymonds and a local business owner, in order to get a consensus on what to do about Saint Andrews. WOCA has drafted a petition and is gathering signatures to have the park closed temporarily, and is trying to engage local government and law enforcement officials to help them figure out what to do next.