Discover or Reacquaint Yourself With The Laurel 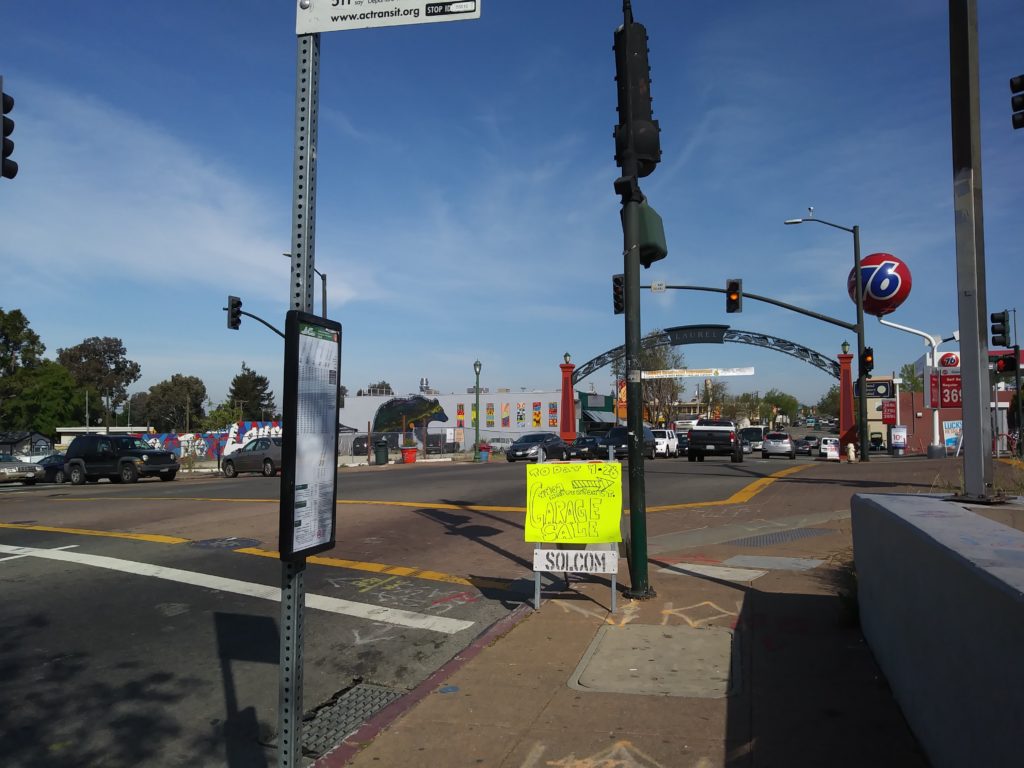 Beginning of the Laurel District

The first thing that I saw of familiarity in the Laurel District was the Subway fast food restaurant across the street from the 76 Gas Station; it reminded me of my hometown, Philadelphia.  Subway makes subs similar to hoagies, sandwiches that originated in Philadelphia and the name reminds me of the trains that run underground. 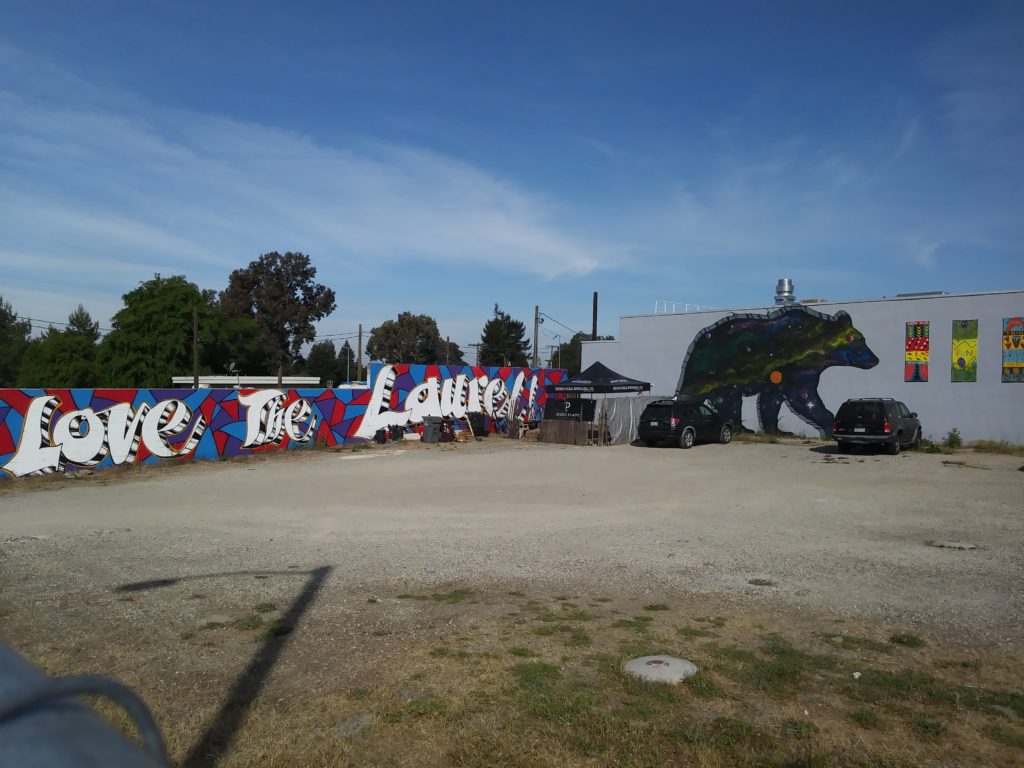 Most of the windows of the businesses in the Laurel District are open, with no curtains or blinds.  Many had event posters in the windows and I felt the community spirit. I cruised on by the Oakland Veterinary Hospital.  I admired the mural in the High Street Drugstore parking lot of two purple bears, the bears being  California’s state animal. 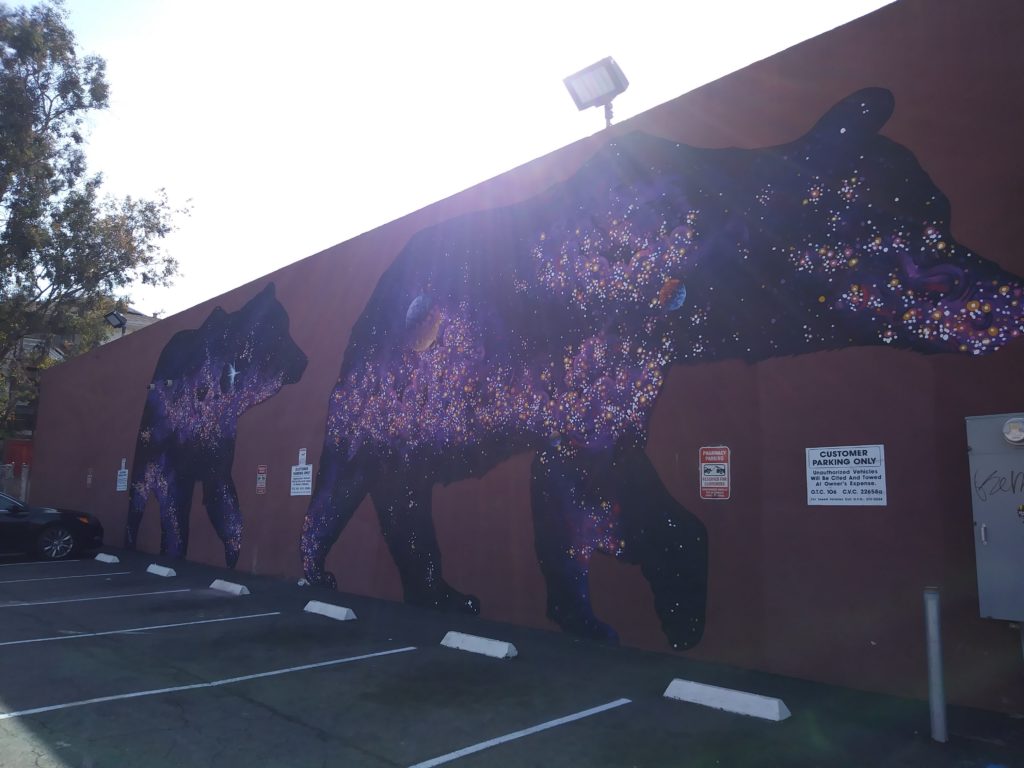 Mural outside of High Street Drugs

As I walked by Anasa Yoga, I glanced at the descriptions of the different types of yoga classes they offer and the chair yoga, practiced while sitting in a char, stood out.  Who doesn’t know about State Farm Insurance and OReilly Auto Parts, well-known merchants? I moved onward past Fists of Flour Pizza Shop; it reminded me of the name of a Chinese movie title.  As a kid, I used to watch them for hours on Saturday afternoons.

I walked past Marquardt Realtors/Property Management Company to Nail Art, to New Method Floor Company to Candy Boutique, whose window was partially boarded up.  On down the street, past Blitz Barber Shop that has a lot of sports paraphernalia. On past Berkeley Driving School, no where near Berkeley, to Diva Styles Salon and Spa and Power Line Pilates and Wellness — the sign advertises services for every budget.  Forward past Graham and Company Beauty and Barber Salon, Savvy The Salon, Be Well Natural, Hype Salon — are these businesses trying to groom us for a day/night on the Laurel? 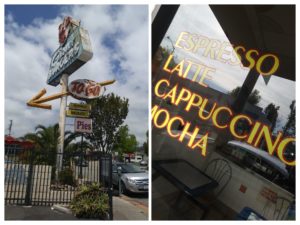 Storefronts in The Laurel

Advancing past Oakland Copy and Print, that’s closed only on Sundays like a few of the other businesses.  Rose The Tailor, Bebe Nail sign says they offer a jelly spa bath for an enhanced pedicure. I wonder how that feels, for there’s nothing like treating oneself to a spa pedicure.  Supreme MMA that offers martial arts training to adults and children. They’re directly next door to DJs Martial Arts and Fitness with kickboxing classes. Continuing upward was Happy Garden Chinese Restaurants next to Happy House Chinese Fast Food.  The Cafe Santana Roasting Company was pretty full, Bank of America and Mizaan Boutique were closed.  At Mizaan, I note the hours of Tuesday through Friday, 11-6 and Saturday, 11-5 because, I’ll be back. Love their chic/vintage/boho-style clothes. 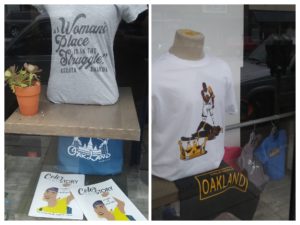 Next up was Laurel Ace Hardware; I have their reward card that offers discounts and other benefits at all of their locations.  I then passed by House of Produce, #1 Seafood and Chicken Chinese Restaurant, Lucky Donuts and Sandwiches, Louisiana Famous Fried Chicken, Komodo Toys, Dollar Plaza, which isn’t a plaza but a discount store.

The Laurel Cocktail Lounge has a mixed over- 30 crowd. Elegant Styling Salon, then Lali Simone is only open on Wednesday by appointment and 1-5, Thursday thru Sunday from 12-5. Her sign said she was taking a mompreneur day.  Thrifty 1 hour Cleaners, Raymond’s Custom Framing (I have a phone full of pictures but believed without going back, framing would be too expensive for me), Phnom Penh Cambodian Restaurant then Mischief, a local gift store had artsy merchandise made by local artists.  Plus they offer  creative classes. 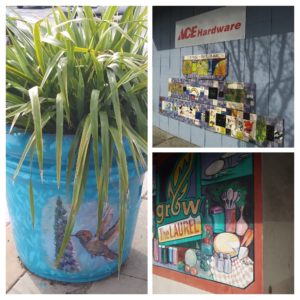 Art along The Laurel District

I walked past Nipaki Creative Play Space that offers workshops, party space and an art area for kids.  On Stage offers kids dance, theatre, and gymnastics classes along with gifts, parties and camps. Fountain Garden Seafood Restaurant; MVMT Ink has Oakland-inspired clothing.  You can find some of their merchandise on their website, Facebook and Twitter pages. The salesclerk said they’ll have the entire store online soon. Zhi Dao Guam The Taoist Center – a clinic for traditional Chinese medicine.

Then there’s a regular-size building under construction, it looks like it might be two-levels upon completion. KFC, World Ground Coffee — their sandwiches are great, their atmosphere relaxed. They have a lot of community flyers on the window sill.  Beast Oakland has Oakland-inspired t-shirts too and usually has hip-hop music playing. Next to them is RBA Creative Firm that offers design, communication, fine art consulting and is a co-working space for creative professionals.

Laurel Optometry is open mostly by appointment. Foreign Domestic Auto. Laurel Dentistry has updated their landscaping.  Next to them is the only house in the commercial district; other houses sit on the streets above and below it. Next to it is a gated lot that appears to have once been a gas station.  The Shell Gas station has a service center.  On the corner of 35th Avenue, the end of the Laurel District, is the Lafranchi Liquor Store; Metro PCS and Taco Bell are on the adjacent corners. I take a rest at the bus stop of the 14, 57, 657, 680, 805 and NL buses. The 54 and NXC  buses run through the district, too.

It took me three hours to walk up and down both sides of the Laurel District, browsing the inside of Therapy and Homestead Apothecary.  Therapy was hiring for all positions, while Communite Table was looking for a dishwasher.  I looked at artists Wendy and Michelle Arbeit’s Stomper In The Town statue;  50 of them have popped up throughout Oakland. 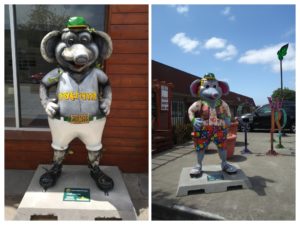 Beauty Supply is a beauty salon despite the name. Launder Laundry has a full Wells Fargo ATM machine outside of it. Laurel Cycler has bikes and equipment.  Sequia Diner is the only eatery with outdoor seating. I couldn’t tell whether or not Gerardo’s Mexican Tacqueria is still open.  I walked by Electric Rouge Tattoo Studio, Alluring Eyes Extensions, LTD Engraving Sales and Service, Ocean Spa, Body Mechanix and Planet Fitness. 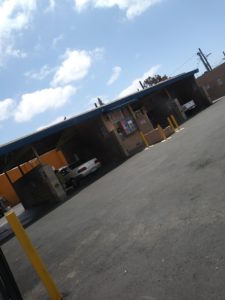 There was Cornerstone Christian Academy along with Kelly’s Corner, a children’s consignment shop with new clothes too. Addresses 4001-4005 were up for sale through KW Commercial; The Laurel Office Center was under construction. H&R Block, Nakasia Childcare, Spray Master s Car Wash, 1/4 lb Burger, Degrees Plato TapRoom and Bottle Shop along with Citibank and other businesses make up  The Laurel. 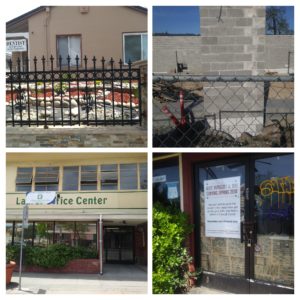 You can find the full listing on the Laurel District Association webpage, “a non-profit community organization committed to increasing the quality of public improvements and educational, cultural, artistic, charitable and social services within the Laurel District and the surrounding neighborhood.”  They run the annual Laurel Street Fair World Music Festival coming up in August. Every third Saturday, Community Day, began April 21-September. 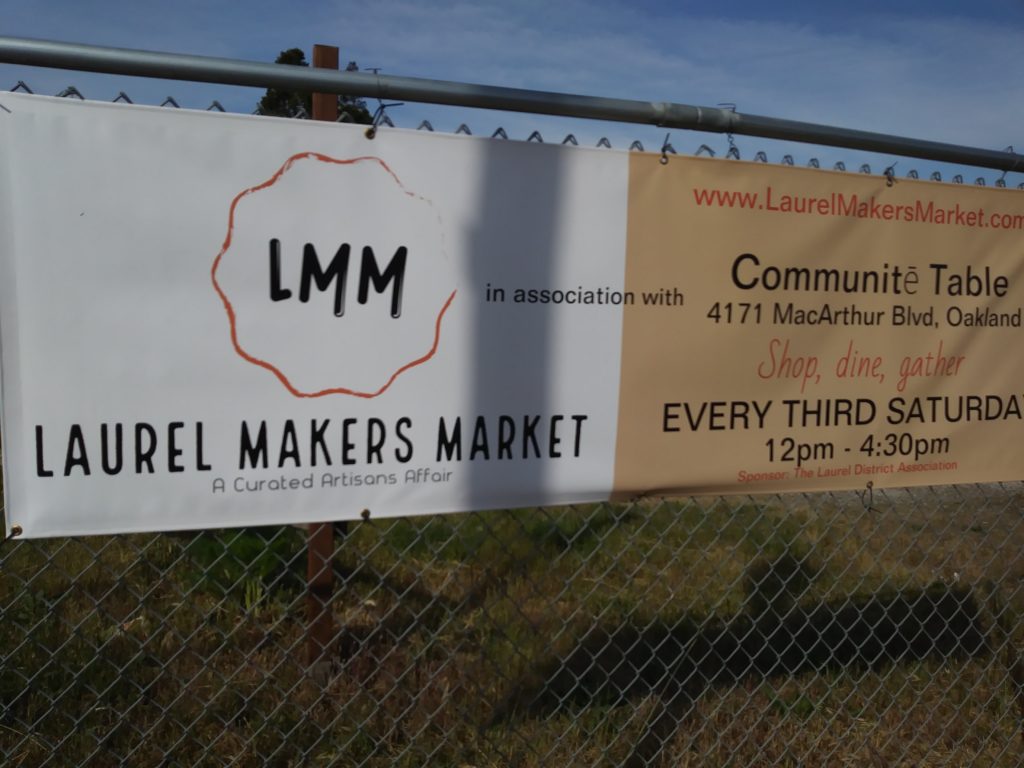