It’s about 3:45 p.m. on a recent Sunday when I arrive at Reem’s, a bakery and café near the Fruitvale BART station that sells Middle Eastern food. It was opened in 2017 and is owned by Reem Assil, the daughter of a Palestinian refugee mother and Syrian immigrant father. 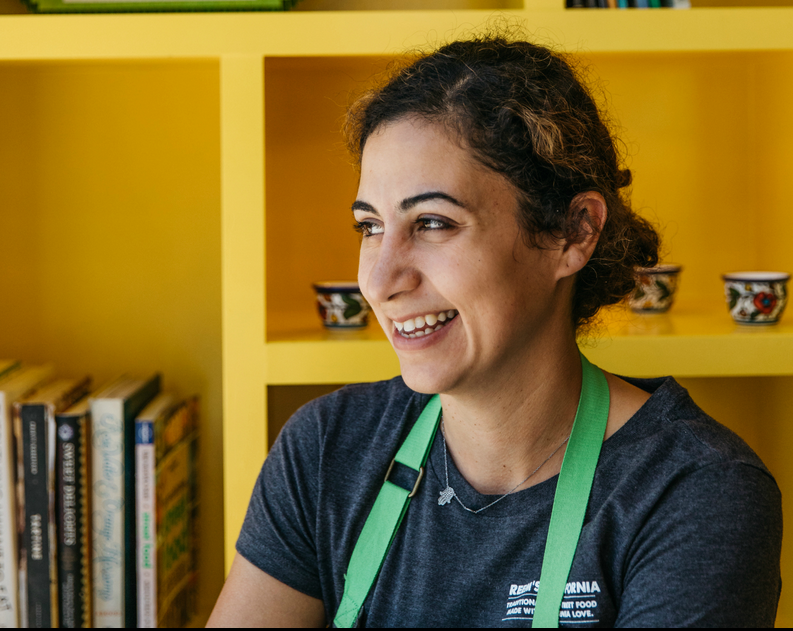 Inside the bakery, about 60 seats have been set up to hear Dr. Sunaina Maira speak about her recently-published book, Boycott! The Academy and Justice for Palestine. 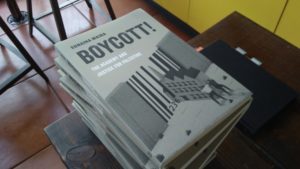 Dr. Sunaina Maira’s book about the academic boycott of Israel

The space is beginning to fill with people of different ages and ethnic backgrounds. Attendees are enjoying Middle Eastern snacks that are laid out on shelves and counter tops. In a short time, it’s standing room only. 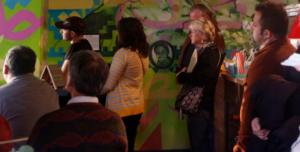 Standing room only at the book talk

Outside, there is a different energy. About 30 protesters stand on the wide, concrete pathway facing the bakery. They keep up a near-constant criticism of Reem’s and its supporters, calling them anti-Semitic and supporters of terrorists.  Their comments focus on a mural inside the bakery and café of Rasmea Odeh, a Palestinian-American activist who was imprisoned by Israel in 1970 on questionable grounds that she was connected to a bombing that killed two students. 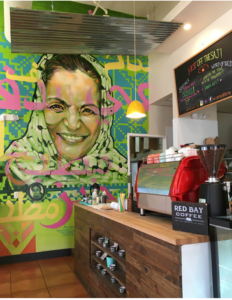 (For more information on the case, go to https://www.telesurtv.net/english/news/Palestinian-Activist-Rasmea-Odeh-Deported-to-Jordan-From-Chicago-20170920-0022.html)

Matthew Finkelstein, a man in purple trousers and a baseball cap, is an avowed Israel supporter and accuses the bakery’s supporters of being indoctrinated.  About 20 Reem’s supporters are standing outside the bakery and they remain silent. These supporters, many of them Jewish, are there to provide security.  According to Lara Kiswani, her organization (Arab Resource and Organizing Center, AROC), is providing security “to make sure that no one is harmed,” after the bakery and café came under attack on several occasions beginning the summer of 2017.  (For an account of the pushback that Reem’s has encountered, go to: https://electronicintifada.net/blogs/nora-barrows-friedman/listen-defending-palestinian-culture-oaklands-reems) 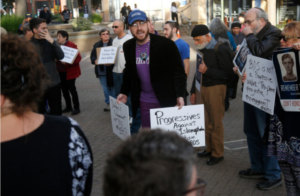 I go inside the bakery, where Assil welcomes attendees and says, to applause, “Our mission is to bring people together across cultures. Our mission is also to celebrate a resilience of Palestinian and Arab identity.” She adds, “We know that the Boycott, Divestment, and Sanctions (BDS) movement is no stranger to backlash, and yet we know that we are doing something right.”  The BDS movement was initiated in 2005 by over 170 Palestinian civil society organizations as a non-violent response to the oppression of Palestinians by Israel. (For more information about the BDS movement, go to https://www.foreignpolicyjournal.com/2017/10/05/13-questions-about-the-origins-objectives-and-war-on-bds/). 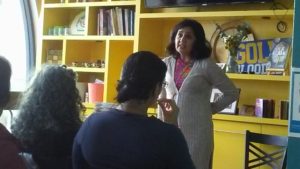 The U.S. academic boycott of Israel got off the ground in 2013, when several academic associations adopted resolutions endorsing the boycott (https://bdsmovement.net/academic-boycott). Maira, a national organizer with the U.S. Campaign for the Academic and Cultural Boycott of Israel (USACBI), explains the historic influences of the BDS movement.

“The boycott (is a) tactic drawing on the history of the Montgomery bus boycott, the UFW grape boycott, as well as the boycott and divestment movement challenging apartheid in South Africa,” she says.  “This Palestinian-led movement uses the framework of freedom, justice, and equality, invoking international law and the simple principle that Palestinians are entitled to the same rights as the rest of humanity.”

“The Zionists have thrown their resources into aggressive public attacks and legal warfare because they fully realize they’re losing,” says Maira, acknowledging that she and other activists have experienced a backlash, like Assil and Reem’s bakery and café. She suggests that this is because Zionists are concerned that BDS challenges Israeli exceptionalism, that Israel cannot call itself a democratic state when thousands of Palestinians are denied basic human and political rights.

During the Q & A time after Maira’s talk, one attendee asks, “What is your broader vision of how BDS can affect life on the ground for Palestinians?”

“It has sent a message to Israel that the world is watching,” responds Maira.