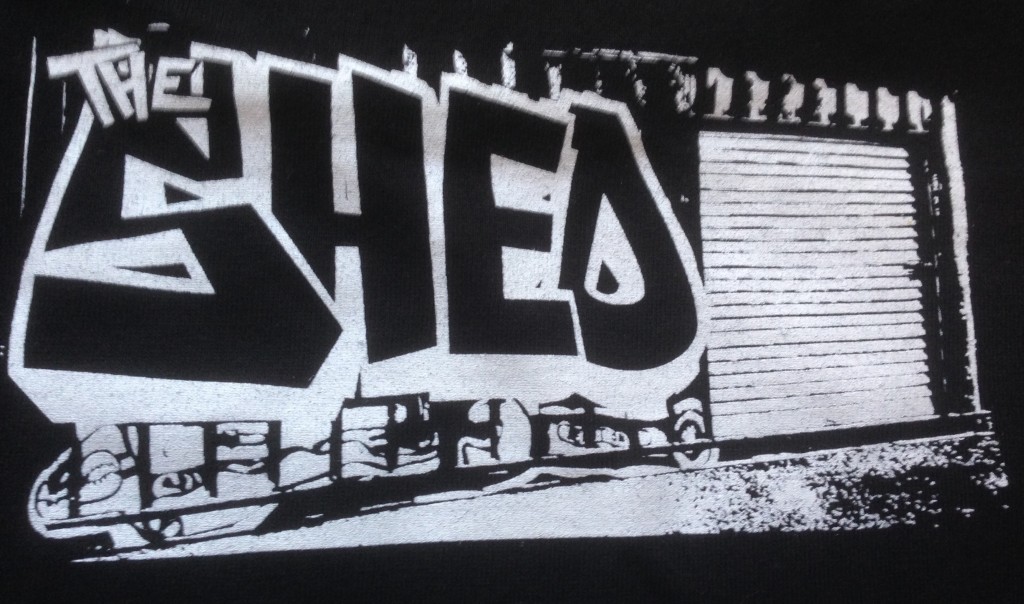 The Original Scraper Bike Team mustered at noon on Saturday, June 11 at the 81st Ave Library. Scrapers torqued chains and pumped air in their tires as they prepared to ride to the grand opening of their new home.

Eleven-year old Izzy, just out of school for the summer, looked on as Miguel, 15, inspected the all-white bike he had built in the program, telling me, “I’m going to decorate my rims with white and purple strips.”

Nearby, Joshua, who had just finished 5th grade, said that joining the team “helped me stay out of trouble and do better in school. But the best part of the club is that you don’t sit around the house. You can go outside and ride around.”

His friend Joehn, who starts middle school at summer’s end, agreed that’s it’s fun to “ride around and do tricks” but what he is really looked forward to is “building a bike,” he said. “I’m still figuring out my design.”

“I’m stoked,” said Reginald “Chef Boy RB” Burnette Jr., Scraper Bike President. He also presides over the 81st Ave Library’s Friday bike fix-it clinics. “This is a great day. The Scraper Bike Shed will be a designated location just for kids to work on their bikes. When a kid has a bike, that’s one less kid that’s going to tempted by gangs and life on the street.”

Burnette’s recent appointment to the City’s Biking and Pedestrian Advisory Commission (BPAC) by Mayor Libby Schaaf gives him a voice to advocate for improving “designated spaces where it’s safe for kids to ride bikes,’ he said. “There’s no access to biking in the flatlands of E. Oakland. I dream of better bike lanes and networks with no potholes so kids can ride their bikes to school and wherever else they want to go. We’ve come a long way from Baybe Champ’s back yard eight years ago.”

Minutes later, the Scrapper Bike Team was on the move, snaking in formation along International Blvd and gliding up 82nd Ave to Bancroft. Founder/ CEO Tyrone “Baybe Champ” Stevenson Jr. set the pace in his bright blue and gold, Golden State Warriors-themed three wheeler. Also known as the Scraper Bike King, he ratcheted up the volume on his sound system, blasting his own hip-hop anthem to the scraper bike movement, On the Scene. “Music at loud and ignorant levels,” he told me later, “is what really gets this community’s attention”. 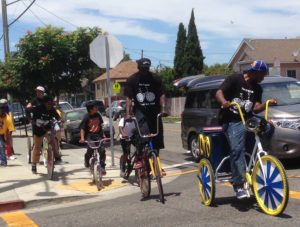 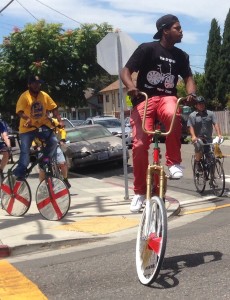 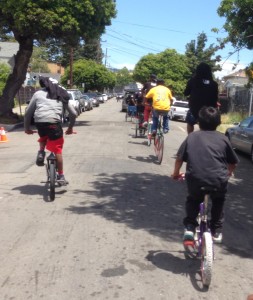 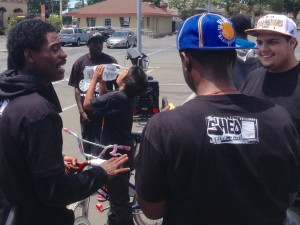 Drivers honked support. Pedestrians waved and shouted out approval as some 20 riders weaved down Havenscourt. They  ranged from 11- year- olds on bright-rimmed BMX bikes to several bikers in their mid-20’s mounted tall on double-framed “skyscrapers,” including Burnette in the middle of the pack. Two otherwise out of place senior cyclists in spandex — board members of Bike East Bay — brought up the rear as the riders coasted into their new home at the King Branch of the public library at International and 69th Ave.

Fellow team members, bike advocates, library and BART officials celebrated their arrival. The barbecue sizzled with traditional and vegetarian fare to go along with sliced watermelon.

A stationary  bike powered a blender to make smoothies next to their new home, a former shipping container turned bike shop. The Shed — the culmination of the long collaborative efforts of the Scraper Bike Team, Oakland Public Library, and the bicycle advocacy group, Bike East Bay and other supporters — was officially open for business.

Open Saturdays from 1 p.m. to 3 p.m., The Shed is a youth-led, no-fee bike shop open to all bikers and staffed by members of the Scraper team and local volunteer bike mechanics. Aside from the 81st Ave Library’s Friday afternoon fix-it clinic — which has served thousands of cyclists of all ages since it opened a year and a half ago — it is the only place between Fruitvale and San Leandro where cyclists can do minor repairs. And, unique perhaps to any bike program, it is where young Scraper Bike Team members have the opportunity to make their own bikes. 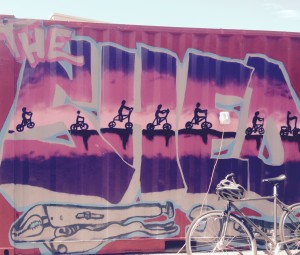 Stevenson, who like Burnette identifies as a 20-something, is recognized as the founder of the scraper bike movement which has captured world-wide attention. (There are over two dozen Scraper Bike youtube clips with well over a five million hits). As a teen working through street violence which touched him personally, Stevenson drew cousins and neighborhood kids to his backyard bike workshop. He experimented with designs, breaking down and rebuilding bikes. He heightened frames and extended seats. Just as importantly, he painted frames in bright colors, accentuating the wheels with streams of multicolored duct tape, discarded candy wrappers and aluminum foil. “A scraper bike is a piece of art,” Stevenson explained to me. “Every artist builds up their bike from scratch using different material, different colors to customize it to fit the artist inside.”

When a fire gutted Stevenson’s house, El Colectivelo, a no- fee bike collective geared toward Latin American refugees near 50th and International, stepped up to share its rent-free space with the Scraper team. For more than three years, scrapers shared tools and expertise with Spanish-speaking day laborers building their bikes to be their main mode of transportation. 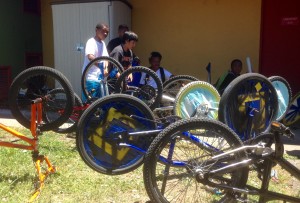 On a typical summer Saturday, 20 to 30 kids as young as 10- years -old worked along side adults in their 50’s, said Colectivelo’s lead volunteer mechanic, Morgan Kanninen. In time, she alternated opening and closing duties with Burnette and Stevenson. “The young folks picked up bike repair skills quickly and were good at explaining tasks,” she told me. ” Older kids became responsible for your younger kids.” Leaders emerged among experienced scrapers. Kids who lacked positive experiences at school or home discovered that their enjoyment of biking also tapped into their creativity and  offered a way to contribute. “For young people with societal cards often stacked against them,” Kanninen said, “it provided community and built up their self-confidence.”

“The crisis truly became a blessing in disguise,” said Kanninen whose role has shifted now to being an advisor and volunteer coordinator for the Scraper Team. “The Shed is all about the relationships that RB and Baybe Champ have built up among the kids and the larger bike community. People reached out. The library location gives greater public visibility and accessibility which gives Scraper Bikes momentum.”

As RB Burnette checked out entries in the wheel decoration contest, Baby Champ Stevenson reviewed the rules for young scrapers: “First, you got to have good grades. Next, you have to have good grades. Then you’re ready to make your own bike from scratch. You will have to teach others to make bikes — each one, teach one. Finally, you have to come to our events and show loyalty to the team. Oh yeah, and you have to have a nice bike.”

Senior Library Assistant Anthony Propernick, who first met Burnette on a Bike to Work Day several years ago reflected: “The Scraper Bike Team is able to bring the 12 to 18 years old age group to the library. It’s a group we traditionally have a hard time getting in here. Once they’re here, we can build relationships and offer other services. The Scraper Team gets kids on bikes, mentors them, gives them structure and keeps them focused on a healthy lifestyle. It’s about these kids you see around you. Obviously, RB and Champ Boy are community heroes. We’re honored to have The Shed at the library.”

The Original Scraper Bike Team is an all volunteer organization which runs strictly on donations and volunteers. Please donate and volunteer here: https://bikeeastbay.org/news/strengthening-scraper-bike-team.

The Shed is open every Saturday, 1 p.m. to 3 p.m., at the Martin Luther King Jr. Branch of the Oakland Public Library, 6833 International Blvd.