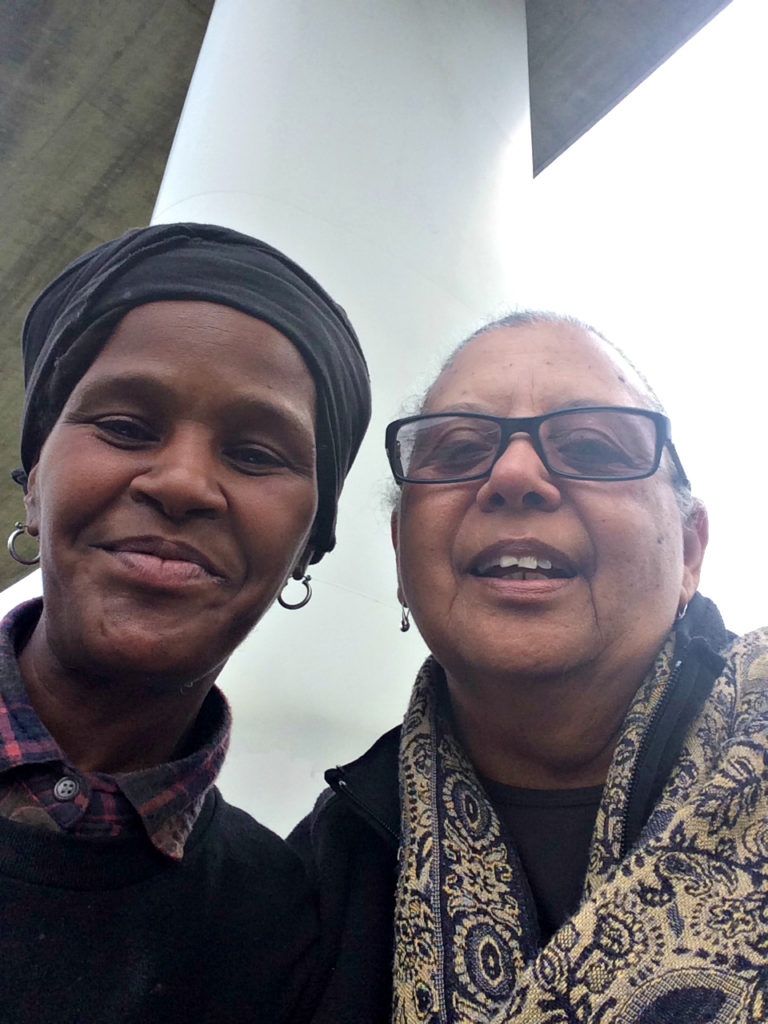 Bridget, left, and me

Bridget found me in 2011. At the time I didn’t know that her existence would have such an impact on me. I wrote about our encounter that day because I wanted my Facebook friends to take a moment to look inside themselves.
Face Book Posting. December 2011
“I decided to stop at Neldam’s Bakery on my way to work. There is a homeless regular who sits outside the door. Sometimes I give her change, sometimes I choose to ignore her. This cold morning she said, “Merry Christmas Lady.” I mumbled “Yeah, Merry Christmas” but noticed her hands were folded inside of her coat to keep warm. I had a pair of my mom’s gloves; I asked this young lady if she wanted them and added that I was sure she wanted money not gloves. She said she wished she could have both.
I handed her the gloves and a little bit of cash and proceeded into the bakery. Upon leaving she said, “God bless you and Merry Christmas Lady.” I turned to answer and fell flat on my behind. Tore my best loved jeans, skinned my knee. “Oh no. Oh no. Are you all right?” she said. I was thinking please just go away. Back in my car, I started to cry. There was a rap on the window and there she was AGAIN.
I thought, “Can’t you see I am miserable and crying?” She held out her hand and said, “I found your earring. Do you have the other one? Do you want to look for the other one?”
I felt at that moment that she and I were sent to the same space for a reason. Not the found earring, though I will admit it is from Afghanistan and irreplaceable. I needed to see the “need” picture. We all have a need: Some big, some small, all significant.
The gloves had my mom’s name written in marker so she wouldn’t misplace them at the (Alzheimer’s) Adult Day Center and I know she would have taken them off her hands herself and given them to that lady. I felt selfish and ashamed. I needed to remind myself to look beyond me. Happy Holidays”
That post was written December 11, 2011 – a few weeks before my mom passed away. I was in an emotional and frazzled state unable to see beyond the now. I hurt inside and felt utterly useless and helpless. The encounter with Bridget saved December 11, 2011 for me forever.
Since that post I have run into “that lady;” Bridget. We have become run-into-one-another-occasionally friends. When I see her, generally she is sitting in front of Walgreens on 34th Street or the Bakery now called A Taste of Denmark. She isn’t always just interested in a handout, she enjoys the contact and conversation.
I try to have a little something for her, just in case I run into her. I discovered that Bridget loves Boston Market after I gave her a gift card and the next time I saw her she recited her entire menu and told me how good it was. I try to have a gift card on hand. 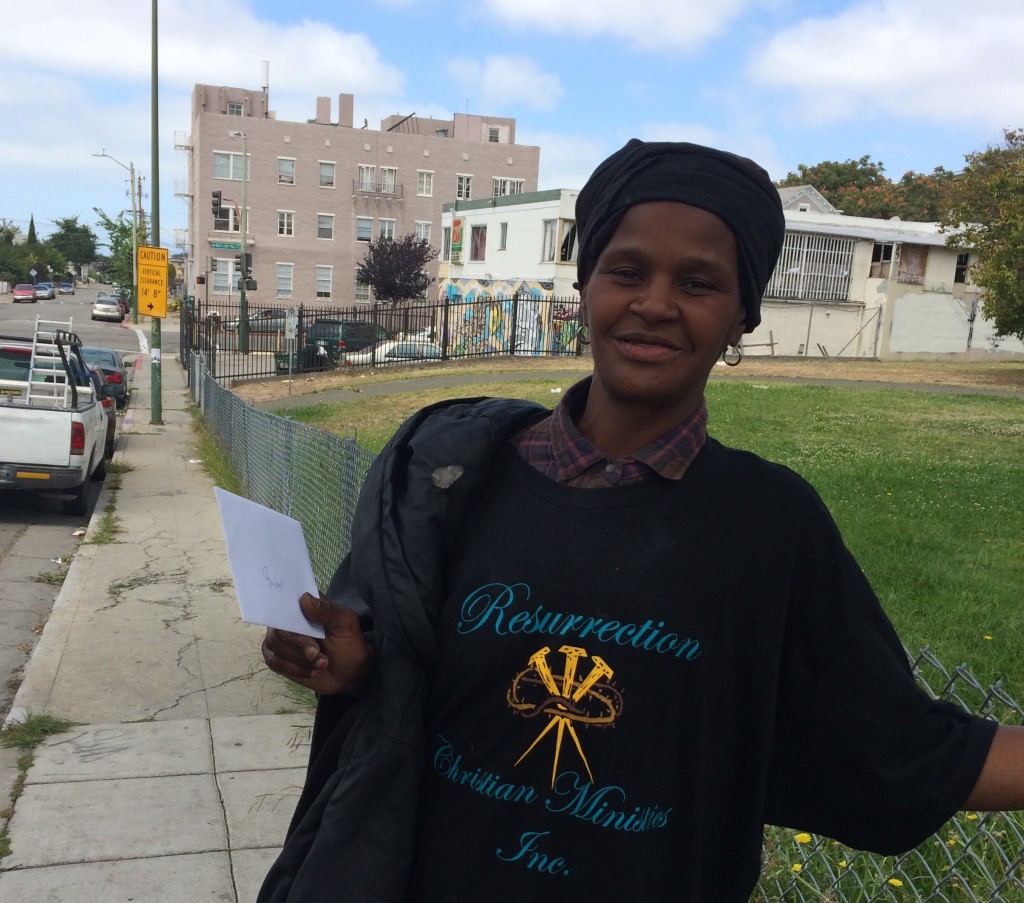 Bridget with my Christmas card

The latest chance visit was last July 23rd. I was actually hoping to run into her for this article and by chance turned down a street that I never use and there she was. She broke into a big grin and I was equally happy to see her and glad I still had a six- months old Boston Market gift card inside of a Christmas card I’d been carrying around since December 2014. You see, there is no “see you next week” in Bridget’s world.
After a few moments with her reminding me of the first time we met, she asked how many times she could eat off of ‘that card.’ I explained, until it runs out. I usually buy them for $10 or $20. I asked her if I could take a picture with her and she was excited when I told her it might one day be in the paper.
So we ended up taking a bunch of pictures together. As I was leaving, I asked her where she lived and told her it is so hard to find her at times. She pointed nearby and went on to discuss some of the more colorful “residents.” She pointed to her ears to show me she was wearing earrings, a reference to our initial encounter.
As I reflect on our meeting , I think I will want to follow Bridget in the months to come. I want to thank Bridget for finding me.