ESL teacher won’t take no for an answer 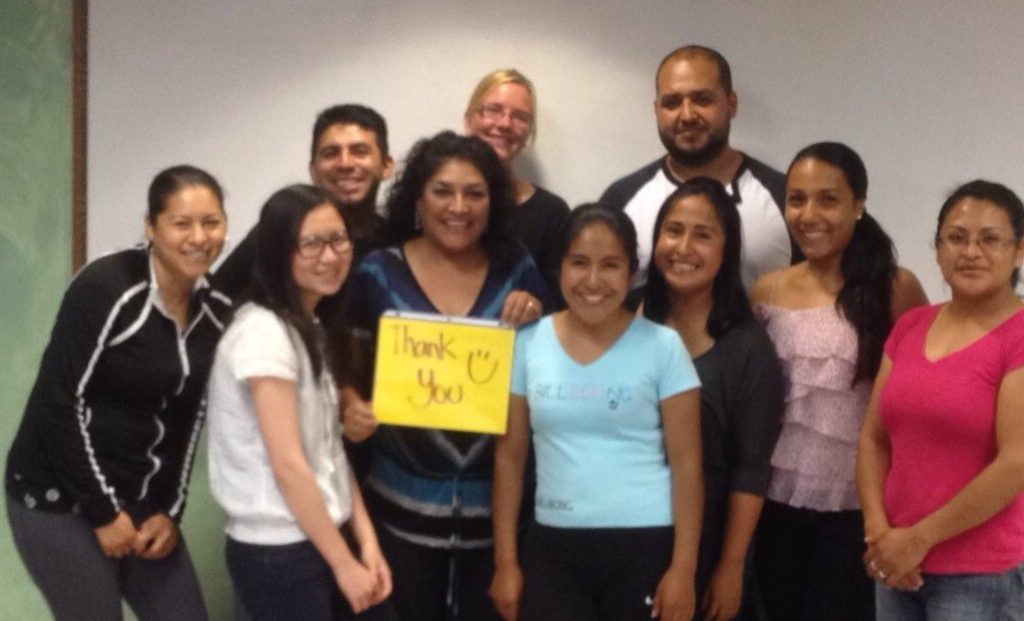 Gaylynne Hudson is one ESL (English as a Second Language) teacher who doesn’t understand the word, “No.”

When changes in the state laws led to significant cuts in Oakland’s ESL programs, many of her former students were unable to attend classes in Alameda, Hayward or Berkeley.

Hudson, who started teaching ESL in South Korea, had loved her Oakland adult classes. She had a close rapport with many of her students and kept in touch with them via social media, where she had friended many of them on Facebook. She also frequently sees them in and around her Fruitvale neighborhood.

“When my former students saw me on the street, “ Hudson said, “they always asked ‘Teacher, where are the classes?’ and I had to tell them, ‘There are no classes.

She got the idea to re-start the classes on her own. Appealing to her extensive network of family and friends, many of them teachers or former teachers, she set up a “Go Fund Me” campaign to raise some money to start classes.

When she had raised $300, she set up a series of three classes for students at an intermediate level of fluency, publicizing it on her Facebook page.

“Dear Former ESL Students,” she wrote. “We have a place to study English. We will be meeting on Mondays from 6:30-8:30 pm at 2111 International Blvd. in Oakland. The name of the school is The Community School for Creative Education. The taco trucks are across the street. The class is free and we will also have free childcare. Bring a pencil and notebook. The class is conversation based. The level is Intermediate and above. Please share this information.”

The class, which met over the summer, focused mostly on conversation and discussion with grammatical and vocabulary introduced in context. It was an intermediate class, but was also attended by some students at a lower level; they just wanted to have a class. It started with eight students and grew to 16.

The students were mature adults; parents, and workers, who were thrilled to have the two-hour session once per week for three weeks.

Evangelina Lara, a 55-year old mother, originally from Mexico, who works as a community organizer of parents, explained that the class was important so she can more effectively help these parents communicate with the schools their children attend.

“The SSC (school site council) is only in English. I want to open the door for other parents to get more involved. It’s about local control,” she said.

Another parent, Jessica Garcia, also wants to improve her ability to speak with her child’s teachers. “I want to help my kids prepare for the future, to get good jobs,” she said. “Right now, I don’t feel confident; I like to speak properly. Class is the best thing, too!”

Maria Neria, 42, also from Mexico, talked about wanting to be able to address issues of violence and prostitution in her neighborhood.

“When there is vandalism or domestic violence, we can’t report it. We are not taking care of our residents,” she said. But she also came because she loves the class. “I enjoy to learn! If you don’t practice, you can’t speak.”

The campaign raised a total of $400 that Hudson used for expenses ranging from photocopying materials for student use, to onsite child care, so the parents could focus on learning. Other costs included an honorarium for the Community School for Creative Education, which made classroom space available, and a percentage that goes to the Go Fund Me site.

The classes were so successful, Hudson, now the ESL coordinator at Alameda Adult School, hopes to continue the self-funded course for adult English learner in July and August, 2016 (many adult schools no longer offer summer classes.)

If she can raise enough funds, she will be able to increase the number of classes and perhaps bring in one or more additional teachers to offer more levels of English fluency so beginners and pre-literate students can be taught as well. Her Go Fund Me campaign is accepting donations, at: BRING ESL BACK: https://de.gofund.me/bringbackenglish

“It was important for me to teach my students because they had no other options in Oakland this past summer or even during the regular school year,” explained Hudson, an ESL teacher for more than 20 years. “This is my community, I live here, I have a home here, so this is my responsibility.”

In her role at Alameda Adult School, she is actively building a Family Literacy Program at Ruby Bridges Elementary School, teaching the parents and families of students. Her focus is two-fold; teaching the adults how to communicate in English and also helping families understand the American school system, including the complexities of the Common Core State Standards their children will be expected to master.

She said she hopes to continue serving the many immigrant families from the Middle East, Latin America and Asia, including refugees. Some have had almost no prior schooling in their native countries.

Hudson offers so much more than mere language skills. She brings her heart and soul to creating a path to help students become part of the fabric of the community, with effective communication and integrating them into the school system. It’s a great first step to becoming a citizen, or long-term resident, who can sample with confidence, all the considerable abundance that the Bay Area has to offer.