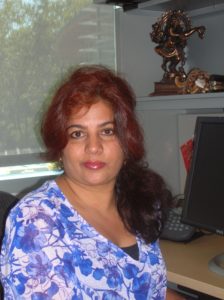 Neha Dave teaches at Mills College’s School of Business. She often works at her desk under the watchful gaze of a brass image of Ganesha, a Hindu deity revered as a remover of obstacles. By Debora Gordon, Oakland Voices 2012.

“Including other flavors enriches what I teach,” Neha said. “Understanding poetry crosses many barriers, it has a lot of wisdom in it.  One has to be in a constant mode of learning. To be effective as a teacher, I thrive on learning more and new things.”

Neha started her teaching career at the age of 11, in the poor inner-city Dharavi neighborhoods, near Mumbai (Bombay) in India. She taught poetry, mathematics, English and hygiene to younger students, as part of a series of short community service projects.

Neha went on to earn an MA in Applied Economics from the University of Michigan. Before graduating, she taught classes in her own fields, and lead Hindi courses in the South East Asian Studies department.

As a professor of Economics and Business at Mills, Neha teaches graduate and undergraduate students in a range of topics including international trade, macroeconomics, and banking.  All of these courses are infused with her interest in the arts. Students may be asked to deconstruct a contemporary question in economics that Neha frames with a quote from any of her favorite writers, such as Voltaire’s observation, “It is not enough to conquer, one must learn to seduce.”

Sitting under a statue of Ganesha, an elephant-headed Hindu deity sometimes known as the “Remover of Obstacles,” Neha described moving to the US from India when she was 16.  She neither rejected her own culture nor tried to completely assimilate.  Balancing what she learned growing up with her American experiences has afforded her a lot of wisdom when it comes to dealing with her students. “It can be a harder road. But I decide in each case and situation, I think it through.”

Her approach to teaching is very inclusive. “I try to appeal to many modalities. There is an emphasis on working with others, by yourself, with me, working based on research.  I try to awaken as many senses as possible.”

As a teacher, she sees herself also as a learner.  “I am in a relentless search to make myself better. The character of a nation is built in the classroom. What an honor to be part of it.”

As much as she loves to teach, Neha said the classroom is turning more into a marketplace, which hurts the learning process. “I am  disappointed and gravely concerned that education has increasingly been perceived as a product which you can purchase, and the teacher is looked upon as someone who can demand learning. It troubles me that people have lost sight of how important it is what happens in the classroom.”

Neha loves her job, despite the challenges. “Being a teacher should be regarded as an honor.  You have been entrusted by the universe with the task of building people, shaping their infrastructure, so you want the best of your people in your society to do that.”

If you know of an Oakland teacher to feature in this on-going series of profiles, please contact Debora Gordon at debora.gordon@gmail.com.