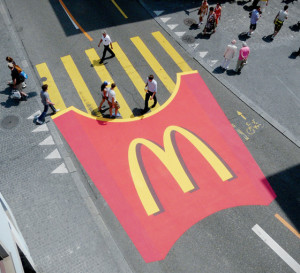 Over the past three days of not eating fast food, I’ve noticed something: I do not crave it whatsoever except when I’m being coerced by advertisements that promise me a lot of delicious food for just a couple of my well-earned pennies.

For instance, one time I was watching television and on comes this commercial for Carl’s Jr. There was a woman lying on the beach with a huge, scrumptious-looking burger gripped in her hands.

She appeared to be in complete ecstasy as she took bite after bite. Her eyes were shut tightly and her head was thrown back as she chewed. The burger dripped with ketchup, mayonnaise, and some mystery sauce.

The woman almost made me feel like heading to Carl’s Jr. just to see what was so extraordinary about the taste of this burger. The sight alone of the burger activated my tastes buds and made me salivate.

My craving for fast food comes on strongest when I walk by a restaurant, mainly McDonald’s.  The aroma of its food flirts with my senses. Sometimes I get lured in when I see advertisements frequently on my television screen that prey on my appetite and cause my appetite to manipulate my mind. The site of steamy, golden french fries from McDonald’s or a Pizza Hut slice with melted cheese being stretched across the television screen causes my taste buds to feel as if they have to have what I’m seeing.

My cravings become so powerful that I actually began to trick myself into thinking about why I should buy it immediately. “Well, it’s only 99 cents,” I think, taunting myself with that lure “only” that’s a staple in fast food ads. Most of the time I fall for my own trick and give in.

Two days ago, I was on my way home when I noticed something absolutely ridiculous. It was a huge picture of McDonald’s french fries plastered across the entire right side of a city bus. I commended myself even more for not giving into my flesh and heading across the street to McDonald’s. I can see how fast food has a strong hold on so much of the population’s diet; advertisements are everywhere and tap into every human emotion possible to make the sale.

Besides my battle with fast food, I’ve noticed another culprit involved with my poor diet: my notorious sweet tooth. My cravings for the most sugar-polluted snacks are just about uncontrollable.

Once again, my nutritionist is a priority in my life. I need help.