Lake Merritt is considered a green solace in the middle of Oakland. Besides being a cultural meeting point, it is a space with ample trees. When you’re walking down one of the paths, the trees and leaves provide shade and cooler air beneath it. Trees are something we might take for granted, but increasingly more important as cities are clamoring to catch up to carbon output and as climate disasters loom.

As such, Oakland is one of the many cities across the country developing its first comprehensive urban forest plan. Set to be launched in the Spring of 2023, the plan is an investment in Oakland’s long-term climate resilience. As more people are living in urban cities, urban forests help bolster a range of ecological benefits including the improvement of air quality, carbon reduction, and stormwater runoff reduction. Equally as important, urban trees help modify the climate, reduce energy usage, and improve overall well-being.

Planning for the urban forest plan began in 2019 and a year later, the city published a comprehensive land cover assessment.

Oakland’s urban forest is made up of both publicly and privately owned trees. Tree canopy can be described as layers of leaves, stems, and branches that cover the ground when seen from above. Tree canopy includes publicly-owned trees such as those found in city parks, streets, and city-owned facilities. Oakland has 535 unique tree species, which is greater than average in California. Fourteen percent of the city’s trees are native to the area. Tree species diversity is crucial to maintaining and safeguarding the urban forest from extreme weather events, pests, and diseases. Most importantly, tree diversity helps urban landscapes better combat environmental stressors such as invasive pests, drought-like conditions, and air pollutants. Monocultures (the planting of only one tree species) can help lessen these stressors but is not sustainable long-term. This kind of diversity also provides greater resistance to disturbances like climate change.

It is not surprising to learn that, despite robust tree species diversity, tree canopy distribution is unequal across Oakland. The average tree canopy concentration is 19%. Neighborhoods like Fruitvale, Prescott, Cleveland Heights, Downtown, and West Oakland all have tree canopy levels that are below the city average. The graph shown illustrates how Oakland is separated by city council district and how land cover is distributed. More than half of the city is covered by impervious surfaces—constructed surfaces like parking lots, sideways and any water-resistant surfaces like asphalt. Out of the city’s largest neighborhoods, Piedmont Pines and Claremont have the highest tree coverage concentrations at 59.7% and 48.7%. Coliseum Industrial Complex, located in district 7 and just off Interstate 80, has the lowest concentration of tree canopy in the city at (2.65%). Despite Oakland’s seemingly low tree canopy concentration average, it actually has a higher tree canopy than San Francisco, San Jose, Richmond, and Alameda, meaning it has more trees in greater concentration, according to the land cover assessment. 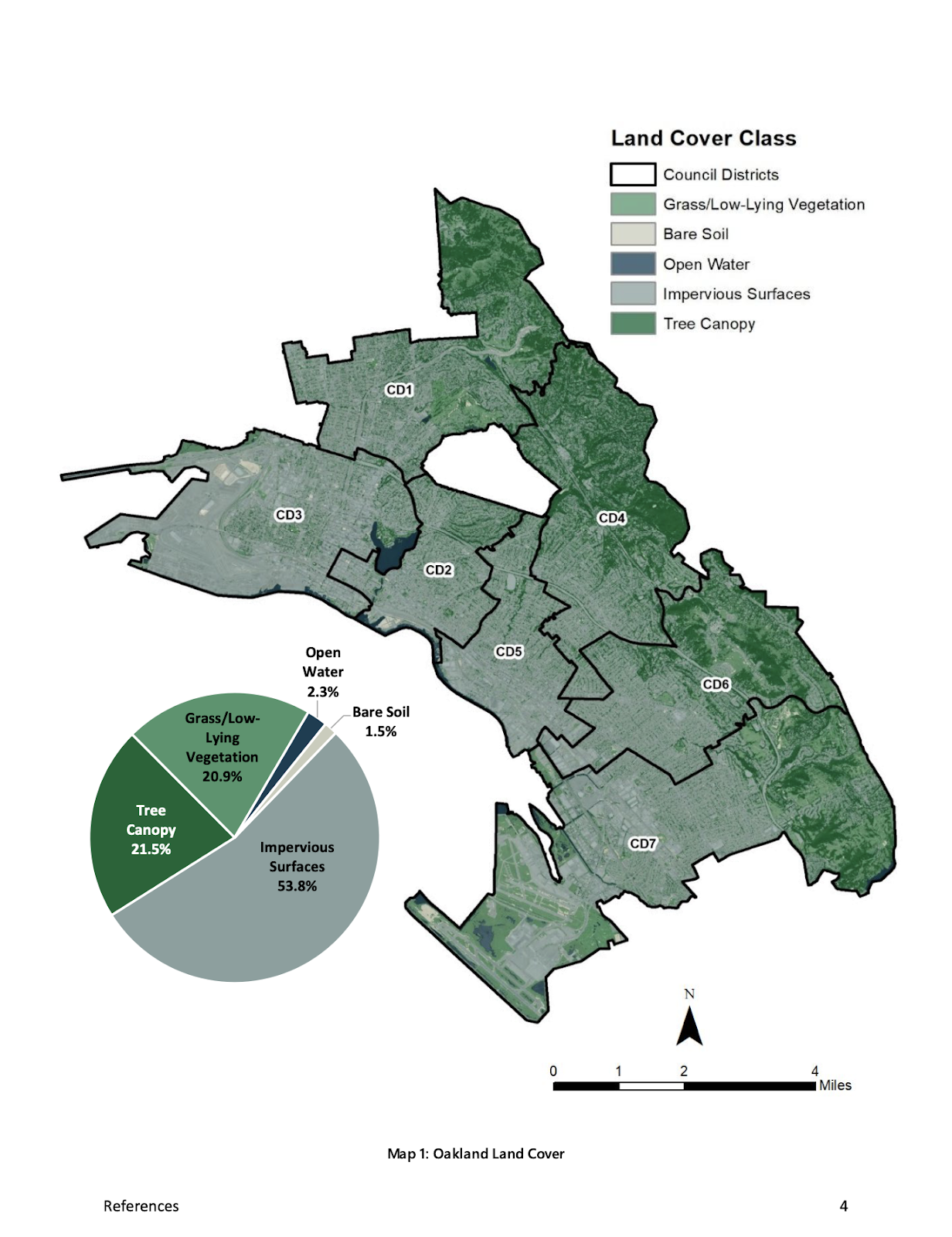 In short, it’s the tale as old as time split of Oakland hills versus the flatlands, where the hills have much more trees than the flatlands.

Redlining’s Impact on the Trees of Oakland

The land assessment, using the CalEnviroScreen—which measures health vulnerability—found that neighborhoods along the freeways and near the airport had the lowest scores, meaning higher pollution burden, asthma, and poverty. These neighborhoods also had lower tree canopy coverage. The neighborhoods with the highest scores and often lowest tree canopy are in close proximity to Interstates, 980, 880, and 80 as well as Oakland International Airport. The urban forest plan hopes to explore how tree coverage can better co-exist with such infrastructure. Much of Oakland’s infrastructure has to do with the lasting impacts of racialized policy—mainly redlining.

Redlining has had lasting impacts on the way tree canopy is distributed throughout the city. Redlining is the process of using maps and assigned colors to illustrate the desirability of certain neighborhoods. A discriminatory practice, neighborhoods marked in red led to banks limiting or refusing loans and services to people in those neighborhoods and were often indicative of the neighborhood’s racial makeup.

To make way for more interstates and highways, entire neighborhoods were torn down, displaced, and/or densely packed and often have more pavement and less tree canopy than other areas. West and East Oakland are perfect examples of this. Between 1935 and 1940, the federal Home Owner’s Loan Corporation (HOLC) assigned different grades across the city that determined what neighborhoods had perceived “mortgage security” and were “safe for investment” for mortgage lenders and banks. Grades were determined by the class of residents, quality of existing housing, and proximity to harmful and favorable influences. However, much of the assessments used to categorize these neighborhoods were based on misconceptions about race and ethnicity—which deprived many neighborhoods of the investment they needed to thrive. For example, neighborhoods that received a D were most susceptible to pollution burden and other health hazards. Although redlining was officially banned in 1968, vulnerable neighborhoods and populations still exist today.

The land cover assessment shows that Oakland has the potential to increase its tree coverage to around 48.5% from its current 19%—which would cover nearly half of Oakland’s land with trees. Increasing tree coverage looks like incentivizing the preservation and planting of new trees on private property, expanding community education, and revisiting zoning laws to explore how they could possibly accommodate more tree canopy.

In the future, zoning laws might be amended to include tree protections or mandate a certain number of plantings or existing ones per area. The expansion of canopy has the most potential in community parks and other zoned open space areas and ensure that policies provide protection for them.

The assessment found that 70.9% of Oakland’s tree canopy is on private land with the highest concentration being found in neighborhoods like the Oakland Hills. In terms of public space, the highest tree canopy coverage can be found in zoned open space areas like parks and greenways, where tree canopy averages about 39.4%.

The forthcoming urban forest plan will be centered on environmental justice and equity and aims to include several community members, partnering organizations, and opportunities for community engagement. A socioeconomic and public health variable analysis was also conducted and shows that between 2014-2020, the city lost 275 acres of tree canopy. This is a common pattern that arises with urban development such as buildings, sideways, and highway expansions. The analysis shows that canopy loss can be significantly attributed to zoning and land use—specifically commercial and industrial zoning. This is clear in neighborhoods like the Coliseum Industrial Complex.

The specific goals of the urban forest plan are being developed but thus far, the plan’s GIS story map illustrates the distribution of trees and canopy across the city. The maps have interactive layers that provide a deeper understanding of land ownership, tree canopy by neighborhood, council district, watershed, and public parks.

You can learn more about your neighborhood’s tree canopy, potential, and resources to guide forest management.

Iris M. Crawford, is a poet and social justice advocate. Hailing from New York City, she is a first-generation Guyanese- American. Her journey has allowed her to empower communities through health care advocacy, education and environmental justice. In 2018, Iris was selected as a semi-finalist Fulbright Scholar for an English Teaching Assistantship in South Africa. She also just became a resident of the 2020 Shuffle Collective Literary Arts Residency where she will be working to strengthen her creative work, gain skills to continue growing professionally and build community. She earned her BA in Political Philosophy and African American Studies from Syracuse University.

Oakland Voices has trained dozens of community journalists over the years. We caught up with one of our alumna, Iris M. Crawford. In our last update about Crawford, we mentioned that she would be attending […]

By Katherine Brown It amazes me how priorities change as you grow older. Feats and experiences that seem so trivial now, meant the world to me as an adolescent. One activity in particular was getting […]