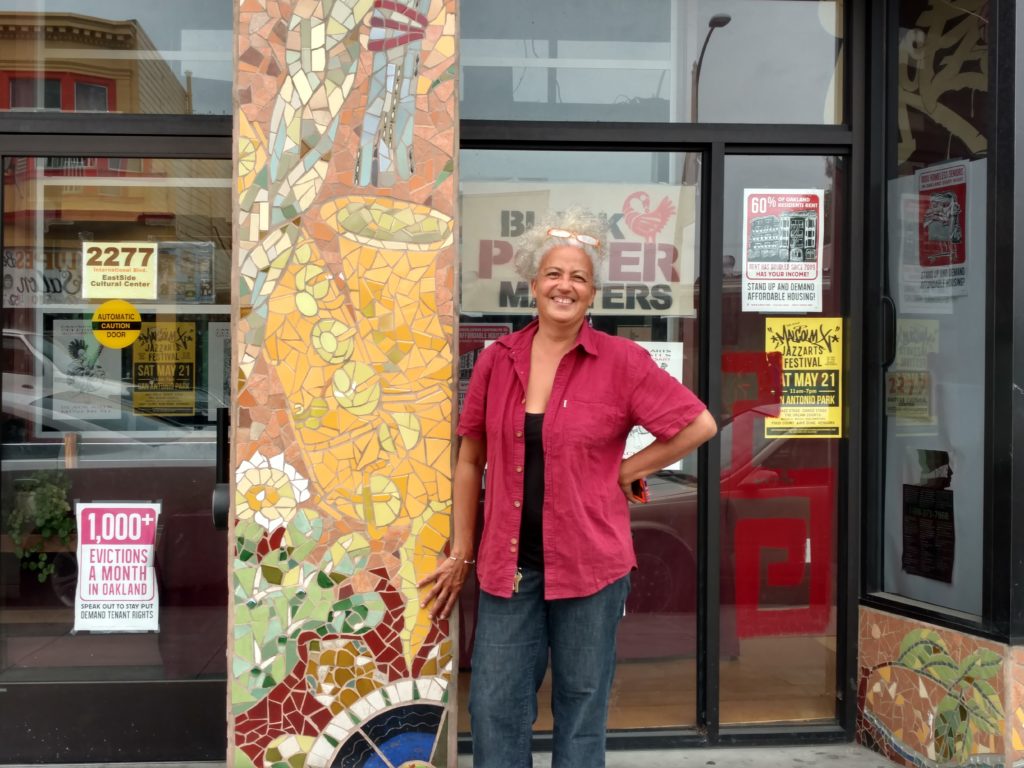 The 16th Annual Malcolm X Jazz Festival, organized by the EastSide Arts Alliance, is expected to draw the usual large crowds to East Oakland’s San Antonio Park on May 21st. The theme of the event this year, “Seize the Time,” celebrates the 50th anniversary of the formation of the Black Panther Party social activist group. In addition, EastSide, a political arts collective in the San Antonio district, will present its vision of a “Black Cultural Zone”—a vibrant cultural space in East Oakland where African-American communities can flourish and that echoes the legacy of the Black Panthers.
“We want communities of color to know this is a time to get plugged in and claim your neighborhood,” said Elena Serrano, director of EastSide. With a massive redevelopment of the International Blvd corridor by AC Transit, Serrano sees the Black Cultural Zone, or BCZ, as an opportunity to create a thriving, healthy, creative environment for those who have lived in Oakland for generations, specifically in the area from 57th Avenue down to the San Leandro border.
So what does a Black Cultural Zone really mean? What would a music festival or a dance studio do to foster community health and development? The Oakland Sustainable Neighborhood Initiative (OSNI), a collaboration between developers, citizens, and the city, has identified EastSide’s “culture forward” agenda as critical to East Oakland’s growth. It is the model for the Malcom X Jazz Festival and one that EastSide hopes to replicate as a daily experience.
“A cultural space is a place where the community can come together,” Serrano explained. “There’s great music and there’s community organizations giving out information, and registering people to vote and getting them plugged into campaigns. That’s the benefit of a cultural hub – a center.”
The prototype of a Black Cultural Zone is that of a plaza, like the town centers of European cities. In other words, the “culture” is broader than traditional arts, in EastSide’s vision. The BCZ could help to keep people in their homes, keep afloat a struggling soul food restaurant, for example,or create an after- school job skills program. “It’s not about making money, it’s about building social capital,” Serrano said.
As examples, Serrano points to the Fruitvale BART station area as a cultural plaza for the Latino community and the Asian Cultural Center in Chinatown as a space for Oakland’s Asian population. She said there is a definite need for something comparable for the African-American residents of East Oakland. As stated in an EastSide brainstorming session :“Black people need places to live in Oakland, places to work in Oakland, and places to gather and celebrate.”
But creating a cultural hub also requires a physical space. These days, Serrano finds herself spending a lot of time talking about real estate with other creative folks—something she never thought she’d be doing. However, it’s critical now because big developers are speculating on real estate and prices are rising quickly.
EastSide has identified a couple of sites that could become plazas; the old Safeway building on 57th Avenue is the favorite choice. “This is the last chance to really hold on to a piece of Oakland and make it thrive and be beautiful,” Serrano said.
Already, many pieces are in place for the cultural zone. EastSide has secured funding from the National Endowment for the Arts and The California Endowment. Major institutions of East Oakland’s African-American community, including Allen Temple Arms and Acta Non Verba Farms, are onboard. The plans are in motion, but Serrano emphasized that time is of the essence if they hope to support a thriving East Oakland.
You can learn more about the BCZ, as well as enjoy jazz, dance performances, murals, dancing, a kid’s zone and a food court, at the 16th Annual Malcolm X Jazz Arts Festival (one of the few remaining free outdoor festivals), Saturday, May 21, 11 a.m. to 7 p.m. at San Antonio Park, 1701 E. 19th St., Oakland.