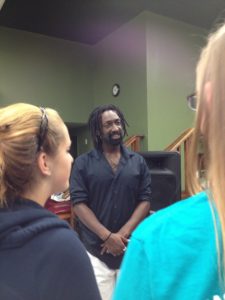 Before taking the stage for an hour-long dance performance, Oakland native Antoine Hunter launches into his usual preparation routine. He runs through some stretches, reviews the choreography with his dance company, makes sure the music is tight and arranged correctly, and then adjusts his hearing-aid.

“Without the hearing aid, I can’t hear anything,” says Hunter.

At the Deaf Counseling, Advocacy & Referral Agency’s (DCARA) 2nd Deafhood forum, Hunter prepares to tell an audience of more than 60 hearing and non-hearing spectators his story through dance and sign language.

Hunter was born completely deaf in his left ear and hard of hearing in the right. Despite this challenge, he continues to have a strong passion for dance. He started breakdancing when he was boy, but was sidelined due to a knee injury.

Then, when he was 9 years old, his mother took him to see the Oakland Ballet. He was in awe at the poise and beauty in each and every one of the dancers’ movements. In his heart and soul, dance was what he wanted to do.

He wanted to take lessons with them, but unfortunately his mother could not afford them.

Again, dance was put on hold.

It wasn’t until he enrolled in Skyline High School in 1997 that Hunter’s passion for dance was reignited. He joined the Dance Production Program lead by choreographer Dawn James, who has headed the program for more than 20 years.

Hunter’s flame has burned strong and brilliantly ever since. “It’s always a blessing to move,” he says. This blessing is truly reflected in each of his graceful and soul-stirring movements. He has the ability to teach and perform a wealth of dance styles, including Ballet, Afro-Haitian, Ballroom, and Hip-Hop.

When Hunter choreographs a dance, he listens “with the spirit. With the eyes. Most hearing people say I hear better than them,” says Hunter.

“I care about the truth of dance. Sometimes I’m off beat with the dance, but who cares? I don’t choreograph to the music. I choreograph to how the body moves – the heart beat.”

At the forum, Hunter uses his own special technique for getting closer to the music. Literally. He stands with one ear right next to a speaker, cranks the amplifier volume up as high as possible, and presses the play button.

Music car bomb-blasts out of the stereo, so loud that it jars a few hearing people out of their seats. But to Hunter, the tunes seem to come as gently as if they were from a bedside radio. He begins to softly tap his feet, nod his head, and move his arms – leading into leaps and spins that his role model Alvin Ailey would be proud of.

(Hunter says he does this same preparation at home. At first, his neighbors would complain about the noise, but now they enjoy it. It usually takes him about hour to memorize the music and the moves that he has created.)

After his performance, Antoine is showered with applause from the whole audience. Hunter puts a lot of body, sweat, love, money, and tears into dance. The positive feedback and the ability to break down stereotypes that people have about the deaf makes all of his hard work worth it.

Antoine says that he is proud to be deaf, and is thankful for the ability to use dance as a communication tool that connects hearing and non-hearing communities. Through teaching and performing, Antoine draws “inspiration from the spirit” of others. “I find out who they are and what their story is. We have different bodies, different languages, and different emotions. Dance becomes a healing tool.”Antoine think of his way of listening to music differently as one of his “super powers.”

One of Antoine’s missions is to bring more opportunities for the deaf community to Oakland. “I’m about the community. Oakland is my home. If you have something in Oakland, people will come. Hearing and deaf. Black and white. Young and old. I have a passion for that.”

Hunter wants to improve the deaf community resources in Northern California, which he says lag way behind other parts of the country. On the east coast, for example, he says increased access to transportation, media, and business opportunities give deaf people a strong sense of empowerment, and an atmosphere where “a lot of deaf people can be themselves.”

He’s taking steps to improve the quality of life for the East Bay’s deaf residents by building connections with non-hearing communities. Hunter arranges free events called ASL Meetups, where people who know American Sign Language (ASL) can socialize and connect with those who don’t.

Hunter has coordinated these events twice a month for the past four years. Today, there are nearly 300 members, and the group continues to grow – a fact that Hunter says proves a connection between everyone who comes. “Hearing and deaf people both have heart beats, [and] want to be heard, want to be alive. Hearing and deaf people are both human – just different cultures.”

In dance and deaf circles, Hunter is known as the “Great Urban Dancing Warrior.” It’s an apt title for a man working hard for Oakland’s deaf communities.

As a black man and as a deaf person, he’s also addressing racial discrimination that exists within deaf communities. One of his goals is to break down the stereotypes of both cultures. “People see a strong body, but discriminate when they see the hearing aid. As a dancer, I have to work 5 or 6 times as hard.”

Hunter helped re-establish the Bay Area Chapter of the National Black Deaf Advocates (NBDA), which became active again in March. “It took seven years to do it – we started with 3 people and now there are 12,” says Hunter.

The NBDA formed in 1982, Hunter explains, after the National Association of the Deaf (NAD) refused to address the concerns and needs of its black members at its 100th anniversary convention. As an NBDA board member, Antoine is active in the community, working to make sure that there is equity in resources, especially for deaf children. Antoine is instrumental in arranging family-friendly performances and events. He advocates for schools to afford the same educational opportunities for deaf and hard-of-hearing children as there are for hearing children.

Through his work as a dancer, teacher, activist, and community leader, Hunter is convinced that his “job is to be a pioneer. I want people to be strong enough to reach their dreams.” With the “Great Urban Dance Warrior” leading the charge, these dreams are becoming realities.