The Double Life of Lam Vo 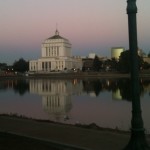 As a teacher in Oakland, I often face the sense of unease as each new shooting or homicide is reported.  I seem to read every few days the news of another shooting, and I always fear that I will encounter the name of a former or even a current student as the victim or the perpetrator.

In December, 2010, I was saddened to read the name of Lam Vo – a student I had for two and a half years. He’s now serving time in a California prison for a shooting in East Oakland. He has given me permission to share his story.

This blog will explore Lam’s trajectory from good student to convicted felon. I’ll also document my effort to understand our criminal justice system as I consider my role as a teacher in the life of a young person.