“Take It or Leave It” 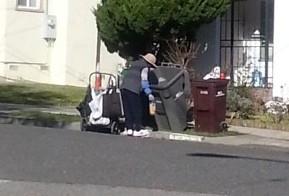 Seeing people begging for money on the street, it reminds me of many middle-aged new Chinese immigrants’ stories.

Maybe many of you have not found out the commonalities among them: they smile to conceal the embarrassment when they do not understand English. They work hard jobs for very low pay. These are the men and women who come through your neighborhood wearing dingy gloves, pushing carts full of recyclables, picking through your blue and brown bins for cans and bottles – just for cash to support their families.

When Chinese parents come to the US, they often sacrifice themselves for their children. Often, they can’t take the time to sit and study English because they are working several jobs to provide better lives for their kids. You would think that, as a society, everyone would respect that kind of hard work. It’s part of American values, isn’t it?

However, what I often see is painful. When those parents miss social cues, or struggle to make their points in English, some people make fun of them. They treat those  immigrants like they are stupid because they do not have the language skills.

Rarely do I see efforts to understand. Few try to know those  immigrants’ stories – what they did in their countries before they came and how hard life is here when you’re starting from scratch.

Sometimes, Chinese immigrants are treated very poorly by their bosses. Can you imagine someone yelling at you constantly, accusing you of working slowly? Especially when the truth is they’re rushing you, so no matter how fast you go, it will never be enough. And forget protesting. You risk losing your job – the main source of income, your lifeline.

It is stressful doing low-wage work  for bosses who make you feel disposable with their “take it or lever it, who cares?”  attitudes.  Little money, few if any benefits, zero appreciation and the constant threat you’ll be fired. The ones who do that work – growing your food, cooking your meals, cleaning your malls and offices – deserve a lot more respect from the rest of us.

No one wants to be pushed so hard and abused. To Chinese immigrants, to all immigrants – especially those trying hard to make things better for themselves and their families – people should offer more understanding. And, once in a while, maybe a smile.