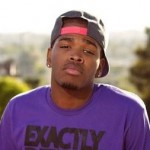 There are many artists in the Bay Area, but Rayven’s passion and motivation sets him apart from the rest. He has came a long way, from being a part of a group along with his brother, to now launching his own carreer.

Rayven knew his voice was a gift, but didn’t really acknowledge it until one of his neighbors next door overheard him singing one day. ”He had a studio and asked me to come get on one of his songs, singing the hook. Ever since then I just loved singing and practiced everyday.”

Rayven and his brother Raymen eventually began producing their own music. Rayven sang for the most part, and Raymen would rap on the track. Back then, most of their songs revolved around girls and relationships. Their classmates knew the brothers’ music from YouTube and mix tapes floating around the school. It only made the duo more popular. 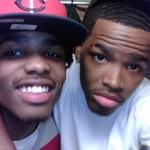 The brothers seemed bound for a bright music career when Raymen was shot and killed near Oakland High on September 21, 2010.  This was a very difficult time for Rayven. “My brother’s death put me in a dark place. I had thoughts of suicide. I wouldn’t eat or drink. I even had a panic attack.”

But it also influenced Rayven to go harder for his little brother. “When I returned home from the hospital I laid in my brother’s bed and thought to myself, ‘what would he want me to do?’ So from that moment on I committed all my time into my music.”

Rayven’s dedication to his music has given him amazing results. He currently has songs featuring more than a dozen artists like Kafani, Gucci Mane, Too Short,  Trina, J Valentine, Pleasure P and many more.  A  lot of his music is played on our local radio station 106 KMEL.

Through hard work, Rayven has also created his own clothing line called, EXACTLY – a name he choose “because I say the word a lot.” 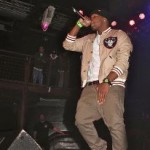 And he’s not stopping there. Rayven said his goals are “to have a hit single that goes big all over the world, and to have a music video on MTV and BET, (and) to perform at the Summer Jam.”

Even as he plots his career, Rayven is always thinking about his family. With success, he also wants “to buy my parents a house and new cars. the list can go on and on,” Rayven chuckled.

Rayven wants to keep his brother’s spirit alive through his music and making sure Raymen will not be forgotten.

“People today are acting like this is the end of the world, but when you’re experiencing combat and have been doused in Agent Orange, a shelter-in-place order is a walk in the park.” […]

VIDEO – ‘Tis the Season: Laurel Neighborhood Harmonizes to Help Others in Need

Is harmony and unity possible in East Oakland? The Laurel Merchant and Laurel District Association strive to prove that it does. The second annual Laurel Holiday Stroll and Donation Drive is just one of over 20 events held in the Laurel District geared towards strengthening relationships between the community and local business. […]

Local Acts and Treats Found at Outside Lands 2021 This Weekend