Poverty Puts Young Women on the Verge of Prostitution 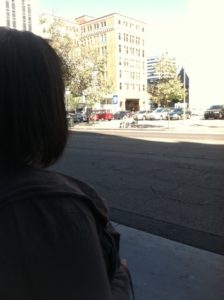 Mary Moore’s father kicked her out when she was 18. Homeless and unable to find work, she was forced to trade sex for a place to live. Photo: Sheila Blandon, Oakland Voices 2012.

The names in this story have been changed to protect the young women’s identities.

Young people find themselves being rejected so often by jobs that are apparently hiring, that many of them eventually opt for quick and easy ways to make money. Living in under resourced communities, many young people here in Oakland feel hopeless for a positive solution to come their way. Oakland is known as a city with high rates of prostitution, drug abuse and murders. What doesn’t get told often enough are the stories of young people who make up those statistics – young people struggling just to stay alive.

Of course they can become unpaid interns or volunteers at an organization or workplace that interests them and wait until there is an open position. But until then, how will they feed themselves? How will they live?

For young women, the easiest and fastest way to get money is to sell their bodies or exchange sex for shelter, food or cash. Mary Moore, 21, from Oakland, became homeless in spring of 2009 when her father put her out right before her high school graduation.Four years later, she is still unemployed and homeless.

Moore and her father never had a good relationship and he eventually put her out. “He didn’t even stay for my elementary graduation. He left before I even walked the stage,” she said. “He was there, but not there, more like a fly on the wall.” Moore does have a relationship with her mother, which is the only reason she still sees her father at all.

Faculty at school were aware of Moore’s living situation, but did nothing to help. They knew, Moore recalled, “but they didn’t help me.” However, she was affiliated with a non-profit organization in Oakland which supported her.

Moore said it has become increasingly tempting to engage in prostitution because she is homeless. After her father threw her out, Moore was stuck – homeless, broke, borrowing money from friends just to feed herself. She said she applied “everywhere” for work – in person and online – but nobody was calling her back.

Some women are forced to walk the streets, selling their bodies for cash. Mary Moore has never done that. Her exchange was different – not for drugs, or money, but just to keep a roof over her head. “I never done it before but I contemplated it. No woman should ever have to think about selling herself,” Moore said.

Even though Moore had never stood on a corner and sold her body to strange men, she had a boyfriend who made her feel like sex was the only thing keeping a roof over her head. Moore explained that if intercourse did not happen occasionally when he wanted, he was not happy. She stayed with him because she really needed somewhere to live.

Before she realized it, sex had become like a form of payment for rent. She soon saw that she could not live like that anymore – exchanging sex for somewhere to stay – so she left. Unfortunately, soon after leaving Moore had no other option but to return to her boyfriend’s home, where she currently resides.

Moore is a strong advocate for sexually exploited minors here in Oakland. She counsels young women who have been trafficked and are coping with leaving that life style. She said that because of them, she stays strong and her work helps her not get too deeply into that lifestyle. “Thinking about it is one thing. Thinking about it and thinking of the possible income, I shouldn’t have to think like that,” Moore said.

She strongly feels that authorities need to stop criminalizing sexually exploited minors by sending them to jail. And media should stop using the word “prostitution” because of negative associations with the word. Instead, they should try to understand why young women choose this route and help them out.

“They need to get the Johns and pimps and incarcerate them,” Moore said, “instead of the young women!”