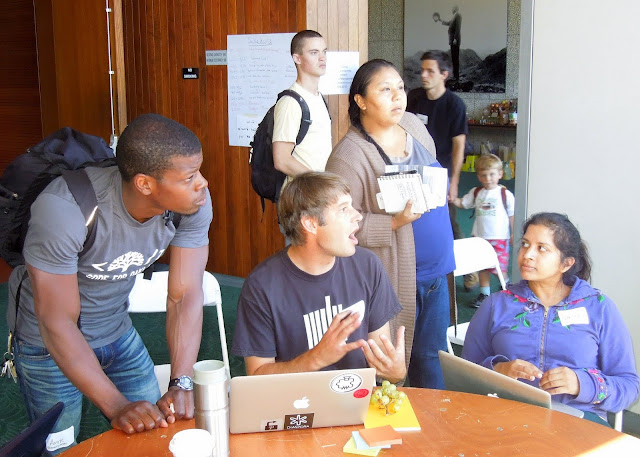 More than 140 community activists and code hackers worked together on projects at Code for Oakland. By Howard Dyckoff, Oakland Voices 2012.

It was a beautiful Saturday in Oakland. And that made it only harder to sit with coders and civic activists, planning and prepping mobile and web applications, behind glass walls as the sun fell on Lake Merritt.

More than 140 committed digital citizens gathered on July 21st at the Code for Oakland event. Hackers and coders worked to improve life here in Oakland and throughout Alameda County.

The grand prize went to Hack the Budget, which allows anyone in Oakland to review the city budget and express their views.  The app, which was awarded $1000, is designed to be accessible from a mobile phones  and web browsers.

Hack The Budget also took the prize for the best civic engagement tool.

510eat.org earned the runner-up slot. The application is designed to share restaurant inspection data collected by the Alameda County Health Department. That may tell us things we don’t want to know about our favorite eateries and may drive customers to new businesses. But I don’t think it will help new restaurants to open in Deep East, where it’s mostly fast food outlets. 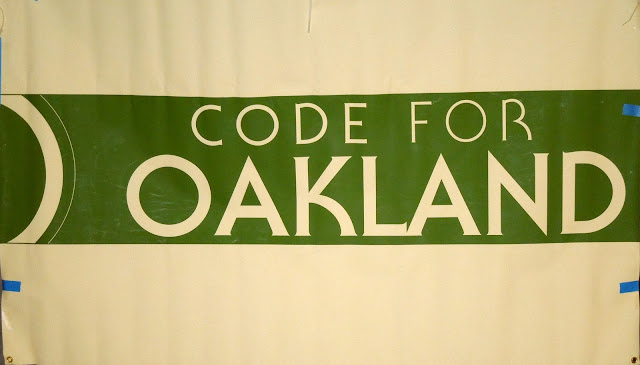 This sign pointed the way to the Code For Oakland project room that overlooked beautiful Lake Merritt, which was quite a distraction for even the most dedicated coders. By Howard Dyckoff, Oakland Voices 2012.

A prize for the best use of civic data went to the Edible Fruit Trees project, which connects homeowners who have surplus fruit with interested Oaklanders.

And there was also a project that may be the most used in Deep East Oakland: Top Cop, which is a mobile app for rating OPD officers.

There was lots of food and caffeine, and interesting presentations from the open source software company Red Hat. Participants also heard from Code for America – the organization that helped create Code for Oakland. Code for Oakland is dedicated to civic improvement through Internet development.

Code for America said Oakland would be a focus of its work in 2013, and that has to be good news. That will be the third year the group runs projects in individual cities around the nation.

As for the Code for Oakland event, interactions there have seeded some on-going efforts to develop other new applications for social and civic engagement.  (I am working with a group preparing a web site to help visualize data sets from Oakland and Alameda County.)

Click here for a slide show from the Code for Oakland event.

About Howard Dyckoff
Howard Dyckoff has lived in Oakland for over 30 years and has been involved with many community groups, including Oakland Digital and Oakland Local, Block by Block and the East Oakland Boxing Association (EOBA). A New York transplant, Howard attended Laney College, where he wrote for the Laney Tower newspaper. He has served as the Berkeley Free Clinic’s Outreach Coordinator, and also worked as an information technology professional at Chevron and Wells Fargo. Howard has been a regular contributor to Oakland Local and online publications such as TechTarget and Linux Gazette. He currently does event photography around the Bay Area.